Food and Drink in Tenerife - a brief guide

The Canary Islands in general and Tenerife in particular have their own indigenous cuisine and drinks and both are definitely worth sampling.

Although, in a section dealing with food and drink, the food is a big subject, let's consider drinks first.

The Canary Islands in general and Tenerife in particular have their own indigenous cuisine and drinks and both are definitely worth sampling.

Although, in a section dealing with food and drink, the food is a big subject, let's consider drinks first.

As you're probably aware, that perculiarly British staple, the cup of tea, is not as popular in Tenerife, except maybe in British bar/restaurants and Tenerife locales in tourist areas.

You can still order it though. Té (tay) is the word for it and if you want it with milk, you have to say so, as, in a Spanish/Canarian bar, you're just as likely to get it black with a slice of lemon.

So, té con leche [tay con letchay] for tea with milk and té con limon for the other option. 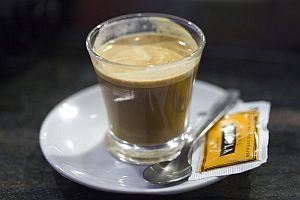 The premier hot drink for Tinerfeños is, of course, coffee. Be honest, now, you've never seen a native Canarian with a coffee in a full-sized cup and saucer, have you? They just don't drink it like that.

Here are the various types of coffee:

Cafe solo The only one served, for some reason, in a cup (a little one), containing just coffee.

For larger measures of coffee, we have:

Cafe con leche The thing most Brits order (but served in a cup on a saucer). Regular sized coffee with milk. Natives usually drink it in a tall glass. If you want to follow suit, ask for "cafe con leche en vaso".

I know this is strictly the non-alcoholic section of food and drink, but the Tinerfeños don't half like booze in their coffee!

Carajillo [cara-HEEL-yo] Small black coffee, topped up with a dash of brandy.

(The sweetness factor of this drink is off the scale! Yet you can still see Tinerfeños putting sugar in it!)

Not a particularly big subject in food and drink, I know.

Many native Tenerife bars will give you a glass, free.

Just a quick note about ice. I hear a lot of Brits refusing the option of ice in their drinks, presumably because they think the ice-cubes are made from tap water and, therefore, not safe. That's nonsense. Ice-cubes are produced from purified water and delivered to bars in sealed packs and are perfectly all right in drinks.

In a Spanish speaking bar, ask for a "Coca Cola", or just "Cola", rather than a "Coke".

For a lemonade, ask for "Sprite" or "Seven-Up".

Spanish speakers use the English words.

The beer native to Tenerife is called "Dorada" [do-RAH-da]. It is brewed on the island and cannot be found anywhere else, except maybe the island next door, Gran Canaria.

This island has its own brand, too, called "Tropical" and, in a reciprocal arrangement, this can be found in Tenerife bars.

If you ask for one, you will be given a bottle, by default. It is also available on draught and, if you want that, you should ask for "una Dorada de barril". To actually ask for a bottle (which shouldn't really be necessary), say "una Dorada de botella" [bot-EL-ya].

If you're lucky, the barman will take a glass out of the fridge when he serves you. Now, that's refreshing on a hot day!

Wine is a staple of Tenerife dining tables and, when out for a meal in a typical Canarian restaurant, you could do worse than ordering the house wine. Okay, it is stored in a huge vat and siphoned off into any old empty bottle that comes to hand, but it still tastes fine!

So, you may find yourself with an old glass water bottle filled with your wine. If the establishment is a touch more upmarket (only a touch, mind) they'll serve it to you in an earthenware jug.

On a personal note, my wine colour of choice is red and I can't be done with it being served at room temperature (I know that's the proper way, but anyway), especially in a warm climate, when it's bordering on the warm. Thankfully, Canarian bars seem to keep their red wine in the fridge. Sacrilege to purists, I know, but all right with me!


To ask for a glass, say "una copa de vino tinto/rosado/blanco". The normal word for glass is "vaso", but, in the case of wine, it's known as a "copa". It seems that this name is for anything with a stem.

The word "copa" can also mean "cup", as the Spanish football league plays for "La Copa" - The Cup. However, "cup", as in "cup and saucer" is "taza"! It all gets very confusing.

Tenerife supermarkets stock 1 litre cartons of wine, for just over 1 euro. That's very cheap and, as a result, they're not too brilliant. They'll do for mixing with soda to create a spritzer, however.

Acting as a sort of link between wine and spirits, we have that inimitable Spanish drink, sangria. Based on the Spanish word for "blood", sangre, because of its red colour, it is a useful long, refreshing drink to have in a large jug, for everybody at the table to share.

There is no absolute set formula for this drink. There is a basic list of ingredients, around which individual regions, towns and even bars, add their own twists.

Just so you know what you're drinking, here's the recipe, with some of the possible variants:


FOOD AND DRINK - Spirits and Liqueurs

Obviously, Tenerife bars and restaurants stock all the major brands of spirits and liqueurs, but there are certain brands that are native to Spain and, therefore, Tenerife. 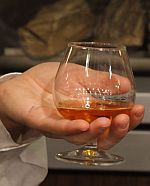 Back in the days when I drank spirits, this was my brandy of choice. Don't ask me why, but it always amused me that a strong liquor had the word "sober" in its name!

Soberano, I found, was a smooth, rich brandy.

Other Spanish brandies include Magno, which the locals favour, Torres, Veterano and Carlos III.

If you are an aficionado of brandy, why not try a few and decide which you prefer?

There is a Spanish produced whisky called DYC, which is considerably cheaper than its Scottish, Irish and American counterparts.

One brand of Scotch that appears quite popular with the locals is "100 Pipers" (or "cien peepairs", as the natives pronounce it).

My favourite whisky used to be Famous Grouse and that's available in Tenerife bars, too. (Plus it's got a good series of adverts on British TV at Christmas.)

There is a local gin called Larios and, as usual, it is cheaper than more international brands.

The proper Spanish version of "gin and tonic" is "ginebra [hin-EB-ra] con tónica", but, thankfully, you can just ask for "gin-tonic".

With a name meaning "43", it is the liqueur featured in the barraquito coffee (see above).

A sweet, bright yellow drink flavoured with citrus and vanilla, it is so-called because it contains 43 ingredients.

Other constituents include fruit juices, herbs and spices.

You'll recognise this from its distinctive polished metallic bottle. It's a liqueur made from a selection of brandies, plus oranges, plums, raisins, nuts, syrup and cinnamon.

Meaning "honey rum" in English, this is pretty self-explanatory - a honey flavoured rum with a soft, appealing flavour.

You see many vocal entertainers on the island taking sips of honey rum between songs. They say it's to lubricate their vocal chords, but we know better, don't we?

Not much I can tell you about the drink itself, for two reasons. One, I don't drink liqueurs and, two, I'm allergic to bananas.

This yellow liqueur, called "Cobana", is very prevalent in Tenerife, because the Canary Islands make their own.

Apparently, it hits you first with its sweetness, followed by an intense, pleasant sourness.

Although featuring prominently in Tenerife bars, this is an Italian liqueur. Its 40 ingredients are a closely-guarded secret, but some are known and some are speculated.

The known ones include myrrh, camomile, cardamom, aloe, and saffron, as well as its base component of grape alcohol. Other rumoured ones are rhubarb, cinchona bark from South America, gentian root, wormwood, bay leaves, sage, peppermint oil, and the ginger-like spices galanga and zedoary (no, I've never heard of them either).

It is usually taken, by young Brits, as a "knock-back", or a "shot", from a small glass, downed in one, as a remedy for upset stomach or hangover. Indeed it does have beneficial properties for the digestive system.

If you ask for it in a genuine Tenerife bar, it will be served as a large measure in a brandy glass, with ice.

At last, we come to food! Before I go any further, here's a bit of info about a famous Spanish culinary tradition:

Up next, you'll find a selection of traditional Canarian or Spanish dishes, linked to a description of each dish, plus a recipe, if you want to try making it at home.

Nicknamed "Spanish doughnuts", these are pastry-based and deep-fried. Eaten dipped in chocolate, they are often found on the Tenerife breakfast table.

One of the most ubiquitous dishes of the Canary Islands and a must for any page about Tenerife food and drink. Their name literally translates as "wrinkly potatoes" and they are best enjoyed smothered in the spicy red mojo sauce.

The famous Spanish sausage, found all over Tenerife in Canarian tapas bars.

Thought by many to be Spain's national dish, this actually originated in the region of Valencia. Very popular in Tenerife, prepared in a large pan for communal gatherings and fiestas.

"Pulpo" is the superb Spanish word for "octopus" and, prepared in the way outlined here, is the most popular way the Spanish people eat it.

One of the most traditional Canarian foods, dating from the time of the Guanches.

Literally and simply, "meat with potatoes", this dish can be prepared in a variety of ways.

Literally, "old clothes"! Intrigued? This is "food and drink", not "fashion"! Well, click on the link!

This rare type of green pepper was once only found in Spain and is a popular starter in Canarian restaurants.

Although a Spanish dish, this is found routinely in every Tenerife tapas bar.

A traditional, Canarian, hearty stew, very popular amongst the natives.

If ever there was a true taste of Tenerife and the Canary Islands, it's mojo sauce.

Simply the Spanish word for "chick peas", these can be an accompaniment to a meat dish, or a meal in their own right.

The Spanish take on garlic chicken.

This cured ham is a very popular Spanish food.

A unique type of Spanish sausage, less famous than the well-known chorizo.

A type of Russian salad, made with mayonnaise, this is found in every Spanish and Canarian tapas bar.

A sweet variety of black pudding!