Tenerife Police Forces - all four of them!

Tenerife - and, indeed, Spain - has no less than four police forces! All, theoretically, have different roles, but, naturally, in the course of fighting crime, these roles can overlap and cause a bit of confusion. Let me try and clarify things a little and offer a bit of advice, should you be unfortunate enough to have any dealings with them.

Also known as the Policia Municipal, these are generally considered to be the most friendly and approachable of the four.

As the name suggests, they are forces local to towns with populations of over 5,000 and are attached to the town halls. They wear light blue shirts and usually drive around in white or blue cars.

Their role is to deal with relatively minor things like traffic control and protection of property. They will also act to control civil disturbances and their duty is to enforce local laws.

Unlike the other two forces, you'll find, in larger cities, that they often have multilingual offices. In resort areas, they often speak reasonable English, which is just as well, as most of their duties involve dealing with drunken tourists who, unfortunately, are usually British. On-the-spot fines can be imposed for a range of offences.

Any member of any force will not be in any way sympathetic or understanding towards you at all if they think you are to blame for any circumstance to which they have been called out. 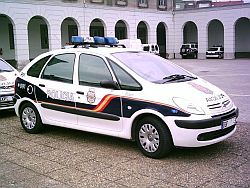 Otherwise known as the Policia Nacional, this force is nationwide and deals with slightly more serious crime than the local one. They patrol mainly urban areas and may be called upon in the event of serious street crime such as violent robbery and rape etc.

Wearing black shirts and trousers, they cruise the streets in a black and white car.

Usually, most officers will possess some form of broken English, but, when dealing with them, a good grasp of Spanish would be a definite advantage.

The "Civil Guard" is the most formidable of the four forces and is a semi-military unit. Its officers deal with such things as drug smuggling, weapon control, anti-terrorism and bomb disposal. They are also charged with the protection of Spain's royal family. 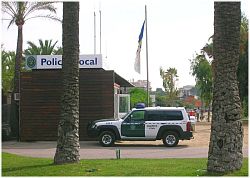 They are garrisoned in "barracks", in keeping with the army connection, where they live with their families. Many sons follow their fathers into the GC, being eligible to join as cadets from the age of 16-17. Initially an all-male force, women were finally allowed to join in 1988.

Wearing green uniforms, they can often be seen in green and white off-road vehicles.

Patrolling rural areas is their speciality, although I've seen them frequently in Tenerife towns and especially at the airport.

Once hated and feared (due to their methods), they have, more recently, undergone a complete makeover and can now be one of the most helpful and courteous forces on the island - as long as you keep on their good side!

According to their official website, their function is to "protect people and goods, guarantee free exercise of rights and freedoms, ensure citizen security and contribute to the attainment of social welfare".

Their uniforms consist of a grey shirt with red trim and dark trousers. The vehicles they drive also have these colours.

If you see a crime being committed, or witness a disturbance by a noisy group of drunken youths, say, you could phone the police by dialing 112. They will not speak English, but, if you can get across where you are, they will quickly send someone round to sort it out.

If you have been the victim of a crime, you must make a report to the police. If you elect to actually go to the police station in person, it is advisable, if you don't speak the language, to take a Spanish speaker with you. You will also have to queue up for quite a long time.

A police report (called a denuncia) is necessary if you have had your passport stolen, in order to get a new one.

A denuncia is also necessary if you've had something stolen that is covered by insurance, if you want to make a claim.

A much easier way to file a report is to phone the Central Office, which is multi-lingual, on 902 102 112. When they answer, simply say "English please", and they will connect you with someone who speaks your language.

You can also carry out this process by visiting the police website. With a surprisingly easy process, you can fill in your form (without needing any knowledge of Spanish) and it will be sent directly to the local station, where it will be ready from 10am the next day for you to just go in and sign - without queueing.

Recently, there has been an initiative begun by Adeje council to form a so-called "Child Police" force. It's not as alarming as it sounds. It is merely a course for schoolchildren to be educated in safety values, respect for heritage and traditions, human rights and the environment. They are schooled in responsible behaviour and driving laws and practices.

At the end of the course, the children receive a certificate, stating that they have been "Child Police". They then are encouraged to apply what they have learned in their schools and, if possible, educate the other children.

During the training, the child - accompanied by a "guardian" - will "patrol" the streets, acting on the law as they know it, including road violations.

They may possibly have their own uniform, but I don't know that for certain.

The bottom line for this initiative is to instil in the child respect for animals, things and others' opinions and to treat people as the child would have them treat him/her.