Pulpo is the rather splendid Spanish word for "octopus" and "Pulpo a la Gallega" means octopus prepared in the Galician style. 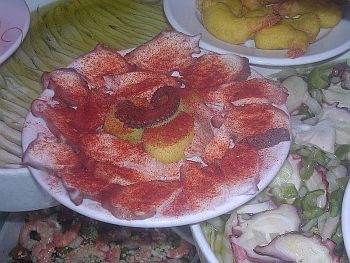 This is a dish often seen amongst the food displays in tapas bars. You'll be able to recognise it by the presence of tentacles with suckers.

I've never tried it myself, not being a lover of seafood, but I gather the texture of octopus is rather rubbery. It's very much an acquired taste and depends totally on its method of preparation as to how palatable it is.

Pulpo a la Gallega is boiled octopus sprinkled with paprika and sea salt. You'll find that the outside, containing the suckers seems a bit slippery, while the inside is quite chewy. This might be a bit much if you're trying it for the first time.

Grilled octopus, should you ever see it on a menu, is much more approachable for novices. In Spanish, it is referred to as "pulpo a la plancha".

Back to the Galician style. It is not strictly authentic to serve the dish with potatoes, but this is often done, so they can soak up the juice. The dish is always served up with bread, for this purpose, too.

The octopus should first be blanched in boiling water for a minute or so. Traditional Galician chefs recommend dipping it into boiling water three times to achieve the desired result.

After this, the octopus should be placed in simmering water, along with the onion, cut in half, and bay leaves and left for anything from one to two hours. Some say you should add a wine cork as well, but that's up to you! To test if the octopus is cooked, pierce with a knife. If it goes in and comes out smoothly, it is done.

Remove the octopus and allow it to cool. It is optional at this point to peel off the skin. Then slice it into small oval shapes.

Arrange the potato slices on a plate and place a piece of octopus on each of them. Sprinkle liberally with the paprika, sea salt and garlic, then drizzle with the olive oil.

With an optional garnish of chopped parsley, it's ready to serve!