Carnivals In Tenerife - including some Fiestas

There are a few carnivals in Tenerife, but a whole host of fiestas, or festivals. Towns and villages have these at various times of the year. Here, you'll find details of them. If you're holidaying on the island at the same time as any of them are taking place, it would be worth trying to check them out. 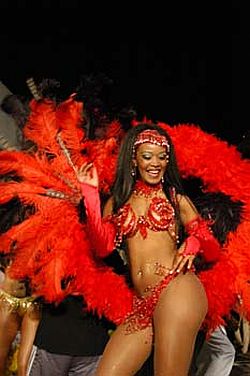 One of the most famous carnivals in the world, second only to the one at Rio de Janeiro. It takes place over fifteen days in the middle of February.

Taking place at more or less the same time as the one in Santa Cruz, this carnival is on a slightly smaller scale, but no less impressive.

Quite a small scale carnival, taking place just before Lent.

For those of you who are in the south and can't get up to Santa Cruz, there is a smaller version of the Carnival in Los Cristianos.

Yet another small festival, lasting for four days at the end of February.

Details of the traditional Spanish Christmas celebrations from December 24th to January 6th.

This is Holy Week, taking place around Easter time, a solemn religious occasion that is very important in Tenerife and the whole of Spain.

An important religious ceremony, taking place on May 3rd, which, coincidentally, is the same date as the founding of Santa Cruz.

Although Corpus Cristi is celebrated throughout Spain, the one in La Orotava is notable for its squares being decorated with huge pictures on the ground, formed of flowers, coloured sand and salt.

Taking place in July, this celebration is in honour of the patron saint of fishermen.

At the end of November, this festival celebrates the arrival of the new wine. Tasting galore!


fiestas and carnivals in tenerife