Camping in Tenerife - return to nature for your holiday experience

Camping in Tenerife! For anyone who has come to Tenerife and decided, on a whim, to stay, sleeping rough on the beach...this is classified as "camping" and, naturally, is not allowed! 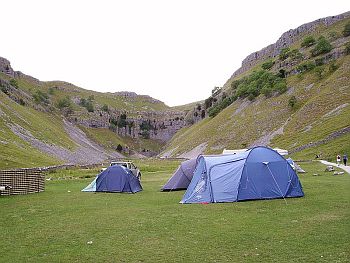 Camping in Tenerife can be a wonderful, adventurous, thing to do, but it must be done legally. It is not only prohibited on beaches, but any areas coming under the Protected Natural Spaces Act of the Canary Islands - in other words, all nature reserves and national parks. But, fear not, you campers out there! Tenerife has proper, legal, designated camping areas.

To use these special camping areas, you have to obtain an official permit from the Island Council at least seven days in advance. They are free, but, to get one, you have to turn up at the appropriate office in person.

This used to be situated in Santa Cruz, but thanks to keen camper, Andrea, who got in touch using "feedback", I now have the new address.

You have to go to the Tenerife Council building named Medio Ambiente, Paisaje, Deportes (Department of Environment, Landscape and Sport), in La Laguna.

It's a red-bricked building tacked onto the side of the large sports stadium,Pabellón Insular Santiago Martín, which is right next to the TF-5 north motorway and can be reached by exiting at junction 5CD (signed Los Majuelos) coming from the south and junction 6 from the other direction (also signed Los Majuelos).

It is unlikely that anyone there will speak English. 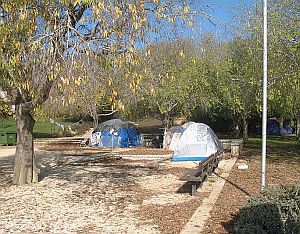 There are sensible reasons for this permit - health and safety for one. Most sites are in the pine forests, where, especially in the summer months, there is an ever-present risk of forest fires and, with the permits in force, the authorities at least know who is out there, to be accounted for in the event of such a disaster. It also prevents overcrowding of the sites.

Facilities at these campsites vary considerably. There are some with next to nothing, some with the basic necessities like running water, suitable for drinking, car parking space and picnic areas, then the really luxurious ones with barbecue areas, showers and toilets. Most have a "recreational area" next to them, the quality of which can also vary a great deal. You are restricted to a maximum stay of seven nights.

Here is a selection of official sites for camping in Tenerife. (On the website linked to above, there are only 13 campsites listed, but, trust me, there are 19 of them.)

Official campsites are generally well maintained and can make for a very enjoyable experience.

There are a few campsites/caravan parks to be found in Tenerife. These offer facilities a far cry from the so-called "wild camping", found at the above campsites.

The sites mentioned next, by comparison, offer a huge range of amenities and, as well as camping in tents, offer parking space for motor homes and caravans, where you can connect up to the electricity supply.

Needless to say, this type of "camping" doesn't come free!

Situated in the Las Galletas area, this huge, luxury campsite can accommodate 2,500 tents and 250 caravans/motorhomes. Operating since 1989, it is open 365 days of the year.

This is a similar type of site, but considerably smaller. Found right on the beach at El Medano, it has room for 68 tents and 25 caravans.

Roughly in the La Laguna area, this site is just 20 metres from the sea and also has the distinction of being set amongst the breathtaking mountainous scenery of Punta del Hidalgo. It can accommodate 15 tents and has a separate area for caravans and motorhomes, which also contains accommodation in the form of wood cabins.