Garbanzos is just the Spanish name for chick peas. Whereas, in the UK, say, the popular form of pea is the marrowfat, or garden, the chick pea is the equivalent in Spain and the Canary Islands. 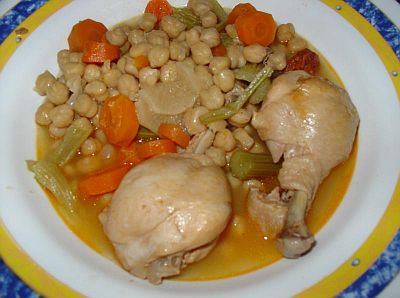 Just as in their UK counterparts, you can buy them ready prepared, but not in tins, but jars. It is also possible to buy them in a bag, dried. The only difference is the convenience factor - with the dried peas, you have to soak them overnight, then boil them for an hour and a half.

Just as with any other pea, they are an accompaniment to a meal. It is usual, when cooking them, to add other things, such as meat scraps. In the photo above, you can see that chopped carrot, onion and leek have been added. It is quite common to include thin slices of chorizo (Spanish sausage).

Jar of chick peas (or the dried variety, which you must prepare as outlined above)

Chop up into small pieces the onion, carrot and leek.

Heat the oil in a deep pan.

Fry the onions until soft.

Add the chick peas, carrot, leek and chorizo, plus the stock cube and water, bring to a simmer and leave until the mixture has reduced to make a thick sauce.

You can serve as an accompaniment to meat, or even on its own, with crusty bread.

See, I told you it was simple!