Gofio is one of those foods that is better eaten as part of another recipe, similar to cous-cous, or rice. On its own, it's pretty bland. 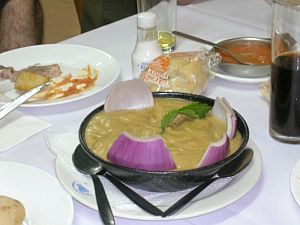 Dating from the times of the original inhabitants of Tenerife, the Guanches, it is a type of cereal, ground and toasted. Originally, barley was used and it was hand-ground between two millstones. Back in those primitive times, various roots and dried fruits were also included in the mix.

Later on, wheat and corn were also used, creating a little more variety of flavour.

As is the case with such other staples as rice, this food is very versatile. Milk can be added, to make it serve as a breakfast meal. It can be an accompaniment to meals, when mixed with such things as oil, water or fruit.

It can be used to coat meat (rather like you would with breadcrumbs), giving it a unique taste and accompanies such things as soups.This versatile food is also found in the recipes for Canarian stew and fish casserole, where it is mixed in with the juices to make a tasty paste.As if all this wasn't enough, you can also find it in cakes and ice cream!

This is one of many recipes involving this food, but is the one pictured above.

Bring the fish stock to the boil. Place the cereal in a bowl with the mint. Pour in the fish stock gradually, stirring continuously so as not to get any lumps.

Garnish with layers of the onion and it's ready!