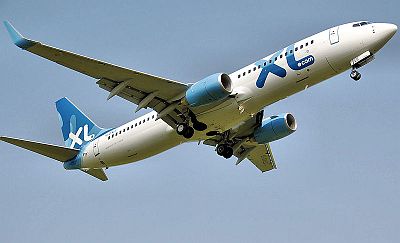 
What can I tell you about Tenerife flights that you probably don’t already know? There are numerous flights every day, by every conceivable airline. You can easily look on the web and there are any number of sites at your disposal. (See below, where you can perform a search for the cheapest Tenerife flights available.)

So, to make this page of some extra use to you, I should perhaps tell you what we do, on our frequent visits to the island.

For many people, money is a real issue, so it is worth going for the cheapest flight available. If you want to fork out a bit more, however, you could do worse than go for a scheduled Tenerife flight.

For some reason, these tend to be a slightly higher quality than charter (therefore costing a bit more). My partner and I always use a Monarch (ZB) scheduled flight, departing and returning at the same day and time, on all our sojourns to the Canarian isle.

Before the credit crunch kicked in, these flights had nice little touches, such as a complementary newspaper as you board and meals included in the price (with a choice of menu). These days, however, there is no paper and you pay for your meal on board (still with the choice). If you don’t want a full meal, you can just have a snack, or nothing at all.

Seats are bookable in advance, as is extra legroom, both for a fee. If you book your actual seat, you can then do an online check-in, which saves time at the airport.

Our local airport is Manchester and, the last time we used it, we discovered something you may not be aware about. You know those little plastic bags they give you in which to place cigarette lighters, perfume bottles and anything else containing liquid? Now, there’s a machine issuing them and you have to put in £1! For this you get a small capsule containing two of them - 50p for a tiny plastic bag! I suggest you save these to reuse on future flights.

Update: They've seen sense and now these bags are, once again, free. Good.

In the case of Tenerife, I would strongly advise smokers not to purchase cigarettes either in the departure airport or on the plane. They can be found much cheaper in Tenerife supermarkets. Drinks are cheap, too. Regarding spending money, I usually take cash and change it as I need it at one of the many money exchange places dotted about all over the place.

Another money option is to apply for the Fair FX currency exchange card, which gives you far better rates than other places, such as the Post Office or Travelex.

Search For The Cheapest Flight Here!

The flight is the start of your holiday. Whichever way you decide to go, regarding flight choice, let’s hope everything goes smoothly and your Tenerife visit gets off to a flying start!

Otherwise known as Los Rodeos, this is situated some seven miles from Santa Cruz and has been handling Tenerife flights since the early 1940s.

Also known as Reina Sofia and opened in 1978, this is found some 37 miles south of Santa Cruz and is most convenient for the tourist centres in the south and southwest.