In the page title, "chorizo" is defined as "Spanish", because the constituents of this spicy sausage vary depending on what country it is made in.

Other places, such as Portugal and Mexico, have their own distinctive ways of preparing it. 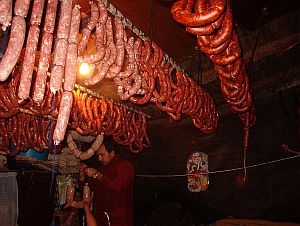 A big difference between Spanish chorizo and that of other countries is that it is cured, as in the picture above. The meat used is pork, which is coarsely chopped and pork fat (of varying amount - see below).

The main other ingredient is pimentón, which is smoked paprika. This gives the sausage its distinctive red colour.

The paprika may be spicy or sweet, leading to the two different types of chorizo.

Quite often (though not always), the long thin chorizos are sweet, while the short, fat ones are spicy.

As is usually the case in Spain, different regions of the country have their own traditional recipes for this food and may include such things as garlic and various herbs. 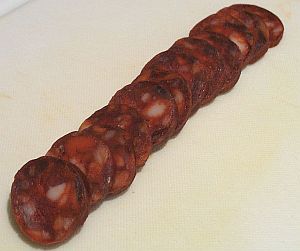 The chorizo may be eaten uncooked, or fried. Generally, the uncooked variety has less fat. The presence of more pork fat makes the other variety more suited to cooking. 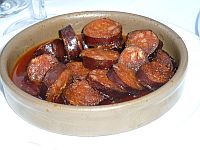 Slice the chorizo about one quarter inch thick. If it is the lean variety, it can be served up uncooked, but it might be a nice idea to fry it in some olive oil. Cook for 5-10 minutes, turning as necessary.

Arrange bread on a large plate, covering some pieces with the cheese and ham, others with the chorizo. Serve.

Is that simple, or what?