Chistorras are a type of Spanish sausage originating from the northern areas of Navarre and the Basque country. They're routinely found on the menus of Tenerife restaurants, which is why they're included here. 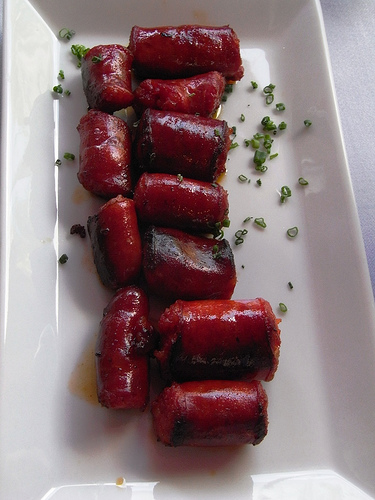 Served as a tapa
(Photo: jlastras)

As can be seen above, the sausage can be served on its own and, as well as a tapa, can be a starter in a three-course dinner.

Based on pork meat, they are also flavoured with garlic, salt and paprika, this last giving them a deep red colour when cooked. They are generally long, thin sausages and, when I've had them as a starter, they've been served whole.

They have a unique flavour and are definitely an acquired taste.

Cooking can be by grilling, but the usual method is to fry in olive oil.

These sausages can be incorporated into many different meals (much as standard pork sausages can in, say, UK cuisine). Here's one popular recipe:

Huevos rotos means "broken eggs" and it is an extremely easy meal to make and quite popular as a breakfast dish.

Amounts are deliberately vague - adjust according to how many people this will be feeding! 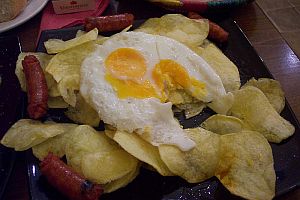 Peel and cut the potatoes into either chunks, thin slices or chips, according to your preference. (In the photo above, they have been thinly sliced.)

Fry the potatoes in the olive oil, with a little salt. When done, remove from oil and set aside.

Fry the sausages in the same oil, till cooked through. Remove and put with the potatoes.

Lose some of the oil and, in the remaining oil, fry the eggs. As they are cooking, use a spatula to break them up. You're not quite scambling them, but you can do it a bit more than the ones in the photo!

Finally, place the eggs on the top of the potatoes and chistorras and serve.

As I said above, these sausages are a bit of an acquired taste. I wasn't sure the first time I tried them, but they grew on me. If you see them on a Tenerife menu, why not risk it and give them a go?