Tenerife Flora and Fauna - species endemic to the island

The Canary Islands chain is one of a group of five situated in the central Altantic Ocean. The others are the Azores, Madeira, the Savage Islands (part of the Madeira Autonomous Region) and Cape Verde. Collectively, they are known as Macaronesia, which is Greek for "islands of the fortunate". 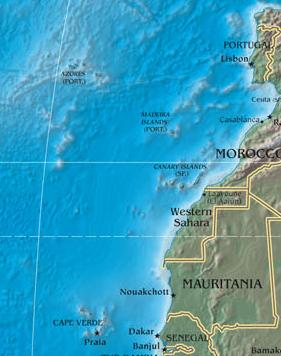 Out of all these island chains, the Canary Islands have the greatest variety of endemic flora. Indeed, it is the fourth greatest in the world. There are in the region of 1700 plant species, of which more than 500 are endemic to the islands.

Regarding fauna, there are over 6000 species of invertebrates and nearly 110 of vertebrates. Not all these are natural inhabitants, however. Some were introduced by humans.

Out of the seven Canary Islands, Tenerife lends itself most to biological diversity, due to its unique climate and geography. There are many local weather conditions and micro-climates. The action of weather and erosion on the various volcanic rocks from which Tenerife is made also contributes to the presence of a wide range of soil types.

There is, therefore, much rich and varied vegetation on Tenerife, with up to 140 species of plant being endemic to this island only.

All these different factors contribute to the presence of many varied habitats in which widely differing types of plants and animals have thrived.

There are six major zones of vegetation on the island, according to altitude and directional aspect.

Sea level - 700m. A xerophyte is a plant adapted for growth under dry conditions. This area of Tenerife is ideal for them. Examples include spurges, cactus spurge and wax plants.

200 - 600 m. A "thermophile" is described as an organism that thrives at a temperature of 50° or higher. This is an area of moderate temperatures and rainfall and has been adversely effected by human activity. It contains many endemic species such as juniper, palm trees and the famous dragon trees.

This is a zone characterised by frequent rainfall and mist. Many large trees, with abundant undergrowth of bushes, herbaceous plants and ferns. Plants such as laurels, holly, ebony and mahogany are much in evidence.

There are quite a few animal, invertebrate and bird species endemic to Tenerife, but I know I'll have to be careful here. In the pages whose links are given below, I might inadvertently include a species that isn't truly indiginous. If so, I apologise, but this information is given in good faith. Remember - I'm not a scientific expert!

Tenerife Insects - some of the more exotic ones!

There is also an abundance of animal and plant life, both in Tenerife's surrounding ocean and its inland freshwater pools.

Although Tenerife is not noted for its freshwater, there are numerous reservoirs and water tanks throughout the island, plus pools of freshwater gathered in such places as caves and lava tubes. These environments have their own collection of species.