In 2003, I'd returned to live in the UK after my eleven-year stint in Tenerife and, after a period of settling back into a routine, began to get work, entertaining in pubs and clubs, in much the same way as I'd been doing on the island. 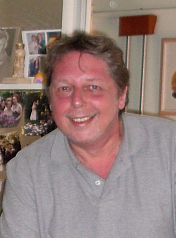 A few years later, work began to dry up, especially as the recession began to bite and I began to try and supplement my income by       being a piano teacher (something I'd already done for a time, back in the 80s). This gradually took off, through advertising and word-of-mouth and, these days, is my main source of income - I don't really go out on "gigs" anymore. (Besides, as I'm not that far off 60 years old - frightening, isn't it - I began to feel I was a bit too ancient to be lugging heavy equipment about.)

A few years later, work began to dry up, especially as the recession began to bite and I began to try and supplement my income by being a piano teacher (something I'd already done for a time, back in the 80s). This gradually took off, through advertising and word-of-mouth and, these days, is my main source of income - I don't really go out on "gigs" anymore. (Besides, as I'm not that far off 60 years old - frightening, isn't it - I began to feel I was a bit too ancient to be lugging heavy equipment about.)

As nearly all piano lessons have to take place outside of school and work hours, I had most of my daytimes free. Over the years since I'd returned to the UK, I'd become reasonably computer-savvy and spent a lot of time on the laptop. Indeed, I had my first taste of creating a website when I sorted out one for my partner Alison, featuring her apartment in Tenerife, which she wished to rent out.

Currently, this website, "Alison's Apartment", which has been live on the web since 2006, has a Google pagerank of zero and an Alexa ranking of over seven million. Please bear these statistics in mind.

Now Alison, even though I'd created a website for her, was forever complaining that I was on the laptop all the time (something that probably rings true for a lot of wives or partners). Deep down, I had to agree with her. But, before I hit the "off" button, I had a brainwave. What if all this time I spent on the computer ended up - making money!

MY DISCOVERY OF SITESELL

It was in May, 2009, that I was idly browsing the Internet, looking at ways of earning a supplementary income. There were all the customary sites, maintaining that their systems would make me a millionaire in no time. Yes, I thought, I'd heard it all before. There is, of course, no such thing as a "get-rich-quick" scheme (unless, I suppose, you create something like "Facebook").

I suddenly spotted a company called "SiteSell". They seemed to be different. They proposed a "get-rich-slowly" system. Hmm. That was interesting. I investigated further. I clicked on a link and found myself on a website with a video message. It was a young man in a check shirt, explaining how the company SiteSell, and their product "Solo Build It!" (now known as SBI!) had enabled him to create a profitable website, dealing with a subject he was passionate about. He was earning money doing something he enjoyed, working on it when he felt like it. But, even though he stressed SBI! wouldn't make you rich overnight, it still smacked of one of those "too good to be true" scenarios.

So, I researched this company a bit more. I discovered sites concerned with the "SiteSell scam". Ha! I thought. Let's check these out. I discovered that these were also successful webmasters with SBI! and were asserting that it definitely wasn't a scam. My interest was piqued even more.

I finally clicked on the SiteSell webpage itself. It seemed genuine enough, but it did involve an initial financial outlay. Should I risk parting with my money on what could easily be yet another Internet rip-off?

I thought long and hard about going for it. Solely because they had a 30-day free trial on offer - money back if not satisfied, no questions asked - I eventually took the plunge - and the adventure began.

You get an "Action Guide" (both video form and written) to talk you through all the procedures, right from selecting your domain name, through the use of the best keywords, to an unbelievably easy method of constructing pages - so much more user friendly than the system I'd used to create "Alison's Apartment".

The site went live at the end of July, 2009, with just a handful of pages. Now, at the time of writing (May, 2011), it has nearly 400 pages and is still growing (I usually try to add a new page every few days). My homepage Google pagerank is 2 and my Alexa ranking is in the 200,000s (which, apparently, puts it in the top 1% of sites). Compare that with the statistics on Alison's apartment, live on the web for three years longer. That's down to the SBI! method. Many of my pages appear on the first page of results in a search, some in top position. If you search for "Tenerife Information", it's at number one, page one! And the best thing is - I love doing it!

WILL IT MAKE MONEY?

Well, they said it was a "get-rich-slowly" scheme. You make money from an information site such as mine by using Google adsense, affiliate links and sponsorship. It is said that, to make real cash, you need at least 500 visitors a day. My daily visits currently run at around the 450 mark and are climbing steadily, but I've already tried monetizing and the money is starting to come in. I'm looking at the long term - by the time I'm getting on for retirement age, I confidently expect my site to be providing a nice pension and probably a lot more. By then, I also expect to have an extra one or two websites on the go, also bringing in the cash.

Just imagine, you could do this, too. Don't forget, my "day job" involves mainly working late afternoon/early evening, working for myself. You might have a boring 9-5 job you don't find particularly fulfilling. Imagine being able to work from home when you want, at the rate you want - and make money! Imagine being able to spend more quality time with your family. You'll be able to take holidays, secure in the knowledge that your business will continue to make money while you do so!

There are so many SBIers who have given up their "day job", because their site is earning them a living wage - or more. Everybody knows something about something. Anyone can turn their passion into cash.

click here to view a selection of real sbi! sites with messages from their owners

Now, if you've got this far on the page, you may be cautiously intrigued about SBI! and its potential. You've probably got loads of questions about it that I've not really covered here.

Well, SiteSell has a group of people (all successful SBI! website owners themselves), standing by to answer all your queries.

To speak to a real person to find out more about
SiteSell's SBI! system, with no obligation, just
click here

IF YOU'VE GOT A PASSION, AN INTEREST, A KNOWLEDGE OF SOMETHING, A COMPUTER AND SOME SPARE TIME, YOU CAN START YOUR OWN WEBSITE BUSINESS

what have you got to lose? there's a 90-day free trial!

If you decide to go for it, like me, good luck - and have fun!

Should you want any further information on my own personal experiences with Solo Build It!, feel free to contact me, via feedback.