The term "Spanish omelette" usually refers to the tortilla. This word actually applies to two entirely different foods. In Mexico, it lives up the English translation of its name, which is "little cake". This version of the tortilla is more well-known in the US. As the tortilla de maiz, or "corn tortilla", it is best known in its manifestation as "tortilla chips" and maize tortillas are also used in the making of burritos.

In Spain, however, the tortilla is known more as a round, layered omelette, quite thick, not folded over. The default version in Tenerife is the "Spanish omelette", or tortilla de patatas, which is one made with potatoes and onion. These are found routinely in every Canarian tapas bar. 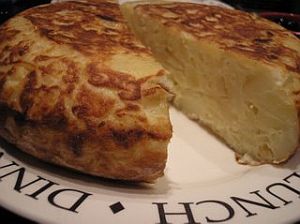 The portion will be served to you cold, or warmed through, as you desire. It is also quite common for people to have a "tortilla sandwich", where it is served between two slices of crusty bread.

Fry the potatoes in the oil, turning occasionally, until they begin to brown. Add the onion and garlic and cook until they are done. Drain the mixture, leaving the remaining oil in the pan. 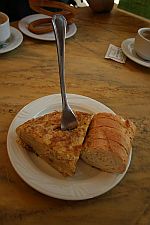 Whisk the eggs in a bowl, together with a pinch of salt. Add the potatoes, making sure they're completely covered with the egg. Transfer the mixture to the hot oil. Then, lower the heat and allow to cook more gently, until it begins to set.

Put a large plate over the frying pan and invert the pan, so that the omelette drops out onto it. Make sure there's still some oil in the pan, then put the omelette back into it, the other way up. Allow to cook on the other side.

Eventually, tip the finished product out onto a plate and allow to cool. To serve, it should be cut into wedges, just like a cake.