Morcilla is the Spanish name for black pudding, but, if you see it as a starter on a menu in a Canarian restaurant, don't expect it to be like the one you get in your full English breakfast fry-up! 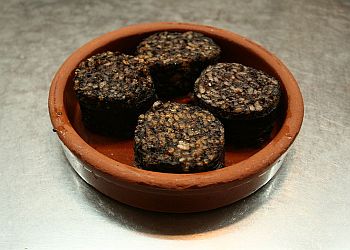 The version most featured on Canarian menus is dulce, which is a sweet variety.

As with any recipe, it has its slightly different versions, according to the region it is made, but generally contains almonds, together with such spices as cinnamon and star anise. Included may also be raisins, pine nuts, cloves and perhaps a hint of nutmeg.

If this seems a complex selection of flavours, I have it on good authority that it is delicious. Just don't expect it to be nicely spicy like the UK version!

Another common variety of Spanish black pudding is the morcilla de burgos, which is prepared with rice as a main ingredient. This is perhaps more like the spicy version people from, say, the UK will know. Apart from the rice, the sausage contains chopped onions, lard, salt and smoked paprika.

I'll not bother with a recipe here, because both these types of black pudding can be purchased in Canarian butchers' shops, or Spanish supermarkets, such as HiperDino or Mercadona.

If you'd prefer to stick to the traditional UK one, pop into Iceland!