Television In Tenerife - all the different options

Television in Tenerife. If you're originally from the UK and you've upped sticks and moved to Tenerife to live, I bet you didn't think much about the TV programmes you'll be able to watch in your new home country, did you?

Here's a low-down of what TV is available and how you can go about getting it. Some methods are not strictly legal, others are fully legal. It's up to you to decide which to choose.

May I say, from the outset, that obtaining Sky TV programmes outside the UK is actually illegal - but, judging from the number of bars with big screens showing Sky Sports, this problem can obviously be surmounted. 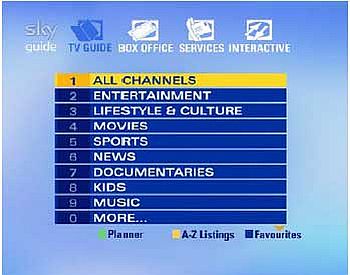 I'll say again: this is illegal. True, BSkyB tend to turn a blind eye to it, but it's still up to you if you want to do it - and I stress that The Tenerife Information Centre is not endorsing this practice in any way. (In fact, in March, 2009, the Spanish authorities announced that they consider British Sky TV programmes illegal in Spain and will confiscate receivers and Sky cards. See the Important Notice, below.)

To receive BBC 1 & 2, ITV 1, Channel 4 and Five, you need a large dish of at least three metres diameter. Certain companies in Tenerife provide you with a full system, including the dish, the digibox and a sky card. This is where it gets a bit underhand. You have to find a friend or relative in the UK who hasn't already got Sky TV and get them to register your card in their name.

Thereafter, as far as BSkyB knows, the system is based at your accomplice's house and they'll start sending their monthly magazine there. Your partner in crime will also be liable for paying the monthly fee, for which you'll have to reimburse them.

You'll then be able to receive a limited number of Sky channels.

There are a number of companies who offer a package of UK TV programmes that avoids your having to go through all the rigmarole of the "accomplice with the Sky Card in the UK" scenario.

Apparently, they intercept the satellite signal and re-transmit it. This, too, is not strictly legal. But I'll tell you about it anyway.

The following organisations can supply you with UK TV programmes:

TELEVISION IN TENERIFE: THE LEGAL OPTION?

Hopefully, the following information is correct. Everything about receiving British TV in Tenerife seems surrounded by controversy!

This, in the UK, is known as "Freeview" and you have to buy the appropriate box to receive the signal, via an ordinary antenna.

In Tenerife, the equivalent of this service is TDT. Again, you have to buy the required box to receive the channels, but there are loads of them. Some have the facility to switch the language to English.

Visit www.tdt1.com/canales-arona/ to get an idea of the channels on offer.

As I imagine that most expats are not particularly interested in watching Spanish television, this is not really the best option and you could perhaps consider the next one.

These are also free channels, the difference being that they are encrypted. Known as "FreeSat", there is one version that is a joint venture between BBC and ITV, for which you need their FreeSat box. FreeSat From Sky is another option, where you have to purchase a FreeSat From Sky viewing card (£25), but have then to provide a UK address (like the Sky information above).

The FreeSat system provides over 140 channels, the FreeSat From Sky over 240.

Unfortunately, neither provide much in the way of sport - so, read on!

A lot of ex-pat Brits used this fully legal, French-owned satellite company a few years ago, because they featured BBC Prime amongst their channels. However, back in 2007, they dropped this channel and, as a result, many British viewers terminated their subscriptions.

These days, CanalPlus features a good selection of programmes from the quality American network HBO and has a language selector for many of its other programmes, so it is a viable, legal alternative to Sky.

I'm well aware that a lot of you want your sport - specifically, football - on your TV. This is where CanalPlus is a winner. If you purchase their CanalPlus Liga package, you'll have access to matches from the UK football league, plus a comprehensive selection of other countries' leagues.

To check out football available on CanalPlus, visit this webpage:

It's worth mentioning at this point the option of using ADMC Sports. The letters stand for Abu Dhabi Media Company, who have secured the rights to broadcast all UK Premier League matches - live!

They come with English commentary, too, from the likes of John Dykes (formerly with ESPN Star Sports) and former Match of the Day presenter, Mark Pougatch.

You need the appropriate receiver box and card and the only company in Tenerife that can supply these for you is Premier Satellite Systems (link provided above).

TELEVISION IN TENERIFE: USING YOUR COMPUTER

If you have a computer in Tenerife with an Internet ADSL connection, there are several ways in which it can be used to receive UK television programmes.

These mysterious three letters, for the benefit of the uninitiated, stand for Virtual Private Network and using this system in Tenerife makes your computer seem as if it's based in the UK.

The science behind it is too complicated to go into here, but the advantages are that, if certain streaming services in the UK think that your computer is there too, then you'll have access to them.

Therefore, a VPN will result in your ability to access BBC iPlayer, ITV player, etc.

This is a device that intercepts video signals received on a Freeview box, Skybox, or any other brand of box and feeds them to a computer via the Internet.

The Slingbox has to be based in the UK and the connection set up with a computer there. It must have broadband and a router.

Once everything has been set up, you can connect to it from your computer in Tenerife and watch live UK TV to your heart's content.

A Slingbox can be purchased from an outlet such as PC World for around £90.