Churros. Different nationalities have their different ideas of breakfast. It is generally regarded by doctors and nutritionists that this first meal of the day should be the largest one, with lunch and dinner becoming progressively smaller.

Try telling that to a Spaniard or a Canarian!

The Spanish tradition is to have a very light breakfast, then an enormous lunch at around 1:30 in the afternoon, followed by the famous "siesta".

So, a traditional Canarian breakfast would consist of cafe con leche (see Food and Drink main page), accompanied by a portion of churros. 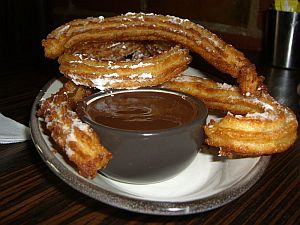 The Spanish tend to eat sweet things for breakfast and these are no exception. They are nicknamed "Spanish doughnuts" and are made pretty much the same way as that primarily American confection.

Churros are made from dough and are lightly fried. Before presentation, they are sprinkled with sugar and drizzled with honey.

If that wasn't enough, you get melted chocolate to dip them in!

This major sweetness factor is continued with other possible breakfast dishes.

There is a bread pudding called torrias. This is also topped with sugar and honey and, sometimes, cinnamon.

You could have Magdalenas, which are sweet, round crackers, bolos, which are a type of muffin, or lemon-flavoured cup-cakes.

Another breakfast option is simply coffee with toast and jam (which always seems to be apricot flavour).

Cereals are entering the Spanish breakfast menu more and more, these days, but mainly amongst the younger generation.

The only concession to health is the prevalence of freshly squeezed orange juice, as a drink to complement the coffee.

This light meal is supposed to keep you going until around midday, when you go off to a bar for some glasses of wine and tapas, to prepare you for the marathon lunch to come!

Mix the flour and baking powder together in a bowl.

Place the water, oil, salt and sugar in a saucepan and bring to the boil.

Pour the boiling water mixture into the flour, stirring it constantly with a fork, so that it becomes a dough, with no lumps.

At this point, start to heat up a frying pan containing about two inches of vegetable oil.

When the dough is quite stiff and sticky, spoon it into a piping bag, then pipe it carefully straight into the hot oil, letting it fry until golden brown.

After lifting it out with a slatted spoon, it can be cut to the required length and left to drain on kitchen paper.

Sprinkle with sugar and/or drizzle with honey and it's ready to serve!