Corpus Cristi La Orotava - a religious festival with a difference!

Corpus Cristi La Orotava. The festival of Corpus Cristi (or Christi), which is Latin for "body of Christ", is a Roman Catholic religious occasion practised all over the world.

In Tenerife, a noteworthy example is the one held in La Orotava.

There is a famous tradition there of creating intricate and amazing sand and flower carpets which, during this festival, adorn streets and squares throughout the town.

Taking place from the second week of May, through June, this event celebrates the Eucharist. It attracts many tourists, because, believe me, these carpets are real works of art (good job Tenerife has mostly fine weather!).

The origin of the tradition of the flower and sand carpets can be dated back many years. A theory has it that a pair of sisters, Pilar and Catalina Monteverdi, made a trip to Italy for La Fiesta de las Flores, or "Festival of the Flowers". This idea of using flowers in a festival was carried back to Tenerife. 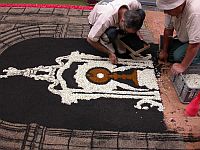 The celebration of Corpus Cristi had been going on for many years, but, by the mid 19th century, had started to lose its "shine". A certain Lady Leonor del Castillo (member of a family that was connected to the Monteverdi family by marriage) hit on the idea of incorporating the use of flowers to boost its impact.

She created the very first floral carpet in front of her home, in 1846, using rose and geranium petals. It measured a mere three square yards and it is from that humble beginning that the unbelievable display of today has come.

Designs are fashioned from both flowers and different coloured volcanic sand collected from the beaches and the foothills of Teide. 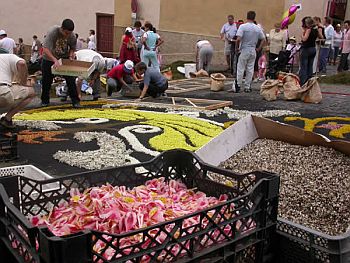 The Dia de las Alfombras, or "day of the carpet makers", is the culmination of this display, when all the carpets are completed. There is then the religious ceremony, the Santísimo Sacramento, or "blessed sacrement", which consists of a procession through the streets, the flower and sand carpets lining the route. 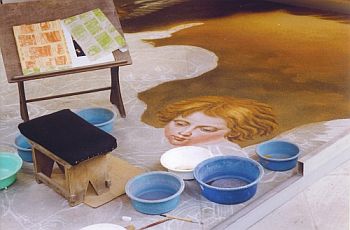