Santa Cruz Carnival - the second biggest in the world

The history of the Santa Cruz Carnival is really interesting. It actually originated in Italy as far back as 1268 and was the period before Lent, when everybody used up all the meat they had in stock, plus any dairy products, in preparation for the period of fasting. Indeed, the name "Carnival" comes from the Latin expression carne valle, meaning "goodbye, meat"! We have our own Carnival celebration here in Britain and it's called "pancake Tuesday".

This practice soon spread all over Europe and was brought to Tenerife by the Spanish Conquorers in the 15th century. The Catholic Church back then was much more influential than today and, as it declared Carnival blasphemous, it went, literally, undercover and people took to wearing costumes and masks to hide their identity.

In 1937, General Franco took charge of Spain and immediately banned it outright. His reason was that it encouraged crime. Next came the Second World War, but, in 1945, it began to hesitatingly take place again, still with the disguises.

It was only after Franco's death in 1975 that the Carnival could begin to be celebrated in the open, flamboyant style we know today.

Since then, costumes have become more and more elaborate. For the Santa Cruz Carnival, cross-dressing is the done thing - in case of the men, in outfits as skimpy as possible. It can be disconcerting to be in a petrol station on the TF-1 motorway, late at night and see burly Tenerife manual workers dressed up as women, making their way north. They can easily look like this: 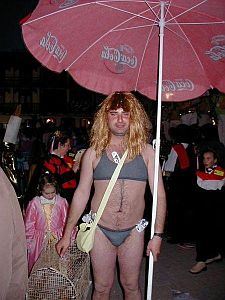 This marks the beginning of the festivities and is on the Wednesday before the actual start of the Carnival. It is a major event, being televised and broadcast to the whole country. The Carnival Queen is expected to represent Tenerife at various trade fairs throughout the world, promoting tourism, so it is a very important post.

Two days later, on the Friday, the Opening Parade is held, with the Queen, her Maid of Honour and entourage passing through the streets of Santa Cruz on a giant float, accompanied by many other people, all in fancy dress. 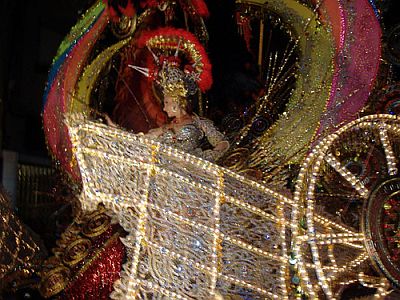 The procession begins at Parque La Granja, a large public park near the entrance of the city, as you approach it from the TF-5 motorway. The route crosses the Las Ramblas district and takes in Avenida Islas Canarias, Plaza Weyler, Calle Méndez Núñez, then returns through Las Ramblas, up the Avenida Anaga, to end at the Plaza de Europa.

Throughout the procession, there is music accompaniment from groups known as baterias. With instruments consisting mainly of drums and percussion, they provide loud, frenzied Latin-American rhythms. It goes on for the full four hours! You can imagine, I'll bet.

Finally, late into the night, the street celebration is well and truly underway.

The next day, Carnival is celebated firstly with a mini parade at 8pm. The evening proper gets underway with celebrations of Latin music in three main squares of the city: Plaza del Principe, Plaza de Europa and Plaza de La Candelaria. Huge stages have been erected and many famous bands will perform. The squares are full of kiosks and fast food outlets and, basically, everyone has a good time.

Late morning, there are performances by some musical ensembles in the Plaza del Principe. Later, at around 5pm, there is a Rondellas contest at the Auditorio de Tenerife, followed by a parade.

At 8pm, the evening entertainment starts with a mini parade, culminating with a Valentine's Day special at 10pm.

Finally, half an hour later, the partying starts in Plaza de La Candelaria, with music from famous bands.

After the obligatory mini parade, at 8pm, there is partying once again with live Latin music, in the Plazas del Principe, Europa and La Candelaria.

The Santa Cruz Carnival continues with the Coso Apotheosis at 4pm. This is followed by celebrations in Plaza de La Candelaria at 8pm, culminating in a firework display.

Burial of the Sardine

These days, this odd ceremony marks the halfway point of the Santa Cruz Carnival on Ash Wednesday. There is a giant model of a sardine, made of papier mache and it is carried in a sort of "funeral procession", accompanied by a large group of "grieving" women - not necessarily real women - down to the harbour. There, it is set on fire, everybody wails their heads off and there is a firework display.

This ceremony, called La Gran Cosa Apoteosis used to feature input from people watching the parade from first-floor windows and balconies. They had made sort of paste balls containing cloth and eggshell and would throw them at the people in the procession as they passed. As the balls could be made into quite formidable projectiles and were often thrown with excessive enthusiasm, the practice was banned as long ago as 1906. Yes, health and safety was rearing its ugly head even then. Thereafter, the onlookers were allowed to throw confetti and streamers. A lot safer, no doubt, but not as satisfying, I'll bet.

If you decide to travel up to Santa Cruz to sample the festivities, please be aware that, if you're not in fancy dress, you'll be the one who stands out! 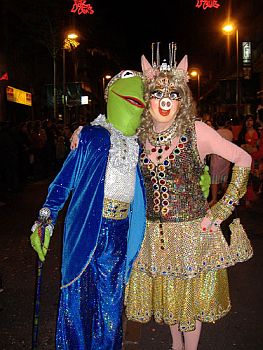