This is the Spanish term meaning "Holy Week" and it is centred around Easter (Pascua). A period of such religious significance is very important in the Roman Catholic country of Spain (and, therefore, Tenerife) and the celebrations on this occasion are much more solemn and pious, in contrast to the wild partying associated with the Carnivals and some of the other Fiestas.

The tradition of Holy Week dates from medieval times and commemorates the events between Jesus's arrest and his burial after the crucifixion. The processions are usually confined to the more historical cities and one of the most noteworthy is the one at La Laguna. 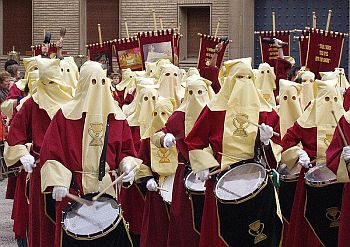 The procession is made up of "penitents", who wear long gowns with hoods, to hide their identities. Others (called "Nazarenos") walk barefoot, carrying shackles or dragging large wooden crosses behind them. 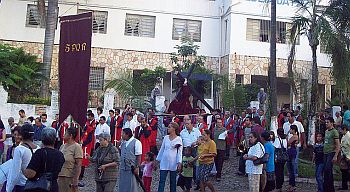 The whole thing may be accompanied by a brass band, playing sombre religious music. 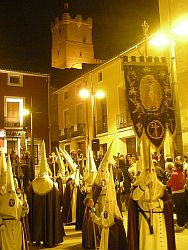 Some of the long, flowing robes come paired with cowls that are long and pointed and, on checking out the picture here, you're probably thinking "Ku Klux Klan". Indeed, this particular organisation in the US took the idea for their outfits from the Semana Santa penitents' robes and gave them an altogether more sinister connotation.

This noteworthy feature of the La Laguna celebration takes place on the evening of Good Friday.

Beginning at around 9:30pm at the Iglesia de la Concepción, the street lights are extinguished and, illuminated only by candles carried by the procession and accompanied by a slow, ominous drumbeat, the pious brotherhood parade slowly through the streets.

The otherworldly effect of this, plus the pointy-hatted robes, more famous for being worn by a racist sect in America, make for a slightly unnerving, maybe frightening, but certainly unforgettable experience.