Christmas in Tenerife. This page will detail the various celebrations from December 24th right through to January 6th.

Nochebuena is the Spanish word for Christmas Eve and means, literally "good night". Traditionally, the celebrations will last well into the early hours.

Things get underway in the middle-to-late evening. In Tenerife and Spain generally, Christmas is time for families and large gatherings of people and the first part of nochebuena consists of a huge banquet of traditional Christmas fayre.

Typically of three courses, it is preceded by a selection of tapas. Then there is the first course consisting of such things as soup or pasta salad.

The main course is a roast dish of beef, lamb or chicken. This is invariably served with loads of fried potatoes and a mixed salad. 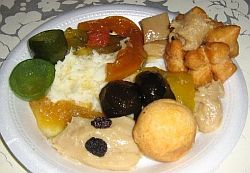 Dessert then follows (after a necessary break!) and can be such delicacies as turrón (a nougat containing almonds), polvorones (almond bicuits), or mantecados (cakes).

Thereafter, there are several toasts drank and, finally, there is the coffee and liqueurs. Alcohol consumed at this point can be Spanish brandy, Cuarenta y Tres, or aniseed liqueur.

This meal can go on for up to two hours or longer! But the night isn't over yet. As Tenerife is part of a mainly Roman Catholic country, it is customary for families to then attend midnight mass. This mass is generally known in Spain as Misa de Gallo, which literally means "mass of the rooster". This name originates from the belief that the rooster was the first creature to witness the newborn Jesus Christ and was able to announce it.

After the service, everyone takes to the street where musicians strike up, to the delight of the crowd. This is known as El Baile del Niño, or "dance of the child". 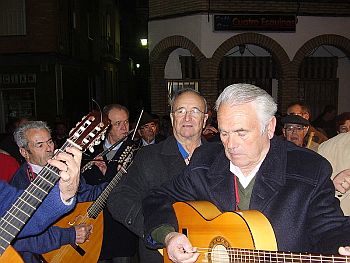 Christmas Day is a little bit like "the morning after the night before", but people still celebrate, albeit in a more reserved way.

There are nativity scene competitions, Christmas lights and decorations and Christmas day markets.

In Tenerife, there are the usual Christmas decorations: Christmas trees, bunting, etc. 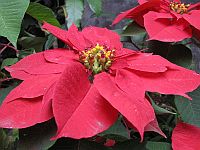 The Poinsettia flower, known in Spain as the flor de nochebuena (flower of Christmas Eve) is extremely prominent at Christmas time. This tradition has, more recently, spread to other places like the UK.

Other common Christmas decoration ideas consist of tableaux of candles. 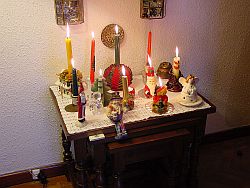 Literally meaning "old night", this is the Spanish word for New Year's Eve.

Beginning in the evening with a traditional family meal, people then venture out onto the streets to see in the New Year.

There are street parties galore and loads of fireworks. In the larger cities, such as Santa Cruz and Puerto de La Cruz, these can be quite spectacular.

Even later on, the bars and clubs of Tenerife can expect to be full to bursting.

Notice how there's been no mention of presents yet? That's because, in Spain, there's no Santa Claus! No, children wait for the arrival of the Three Kings to bring their Christmas gifts. 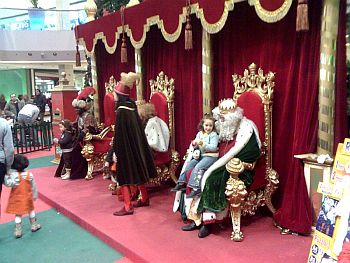 The Cabalgata de Los Reyes, meaning the "Cavalcade of the Kings", takes place on the evening of January 5th and is a big affair.

In larger cities, the Three Kings, Los Tres Reyes Magos, arrive for their Cavalcade with style. In Santa Cruz, for instance, they turn up in a helicopter, landing in the CD Tenerife football ground! Thereafter, they climb aboard camels and lead off the procession.

In the run-up to this moment, children of Spain have sent letters to the Three Kings, saying how good they've been and what gifts they'd like, in much the same way as UK or US children do to Father Christmas.

This is January 6th - Epiphany - and is a Spanish national holiday. It's also, finally, the day when everybody receives their presents.