Los Cristianos Carnival - a more modest event in the south

The Los Cristianos Carnival takes place in March, usually slightly later than the big one at Santa Cruz. It is a much more modest affair, but is useful if you're in the south of the island and want to experience the Carnival without having to trail up to the north.

A lot of the festivities are centred round the Valdez Center and Los Cristianos Cultural Center. Both buildings are in the area just down towards town from the main traffic lights, where there is quite a bit of open ground, normally used for car parking.

A rough guide to this carnival's itinerary is as follows:

This year (2010), it began nearly two weeks before Ash Wednesday, on Friday, March 5th. In the area outside the Cultural Center, all the contestants for Carnival Queen are presented.

After this, there are a couple of events running up to the main attraction, the election of the Queen, a week later, on Friday, March 12th.

The first big day, beginning, at 4:30pm, with a "Makeup and Masks Workshop Carnival", held outside the Cultural Center.

At 7pm, there is the Carnival Parade. This begins at the Cultural Center and makes its way down to Los Cristianos beach.

Finally, at 11pm, the music festivities begin, with live bands and suchlike, outside the Valdez Center.

The main closing parade, the Gran Caso Apothetosis, which sets off from the Paloma Beach apartments, passing along Avenida Juan Carlos I, finishing at the area next to the Valdez Center, where there is a music festival lasting well into the night. 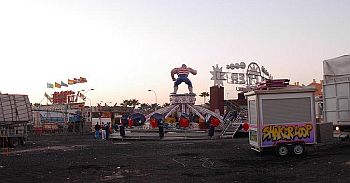 A unique tradition of the Carnival in Los Cristianos is the presence of an honest-to-goodness fairground, to add to the general mayhem.

Alison (my other half) also has vague recollections of this fair visiting Los Cristianos in September, as well.