"Loro" is Spanish for "parrot" and Loro Park was, originally, just that. Situated in the north, near Puerto de la Cruz, it opened in 1972 with just 150 parrots, but, since then, has grown considerably, now housing some 3,000 in total. 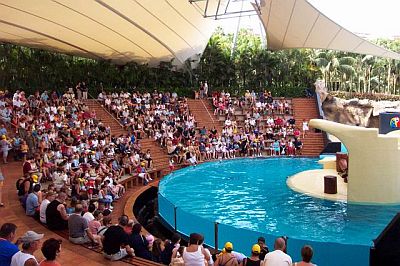 Not only that, it has now become a fully-fledged zoo. The aquatic world is well represented, with the largest dolphin pool in Europe, the world's largest penguin exhibition, the longest shark tunnel in Europe and the only whale ocean in Europe. Under this category, you can also see sea lions, alligators, exotic fish, piranhas and sea horses.

Until its sister attraction, Siam Park, was opened in Adeje in 2008, it also laid claim to containing the largest Thai village outside Thailand.

The park offers free transport from Puerto de la Cruz town, running every 20 minutes throughout the day. Look for the yellow train!

The famous parrot show occurs six times a day and, nowadays, takes place in a huge building styled after an Arabian palace.

The parrots display their skill and intelligence, solving puzzles and performing tricks, sometimes flying above the audience, inches from their heads.

Prepare to be amazed...and amused.

A must for all ages. 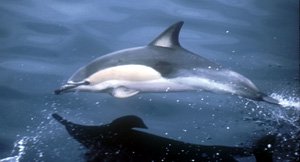 Another famous attraction of Loro Park is the entertaining dolphin show, which takes place four times a day.

The large pool, opened in 1987, is one of the most up-to-date in the world and seats 1,800 people. It reproduces the conditions of a Caribbean lagoon and is so authentic that the mammals have bred within its confines, producing five offspring.

My advice - bring your cameras! 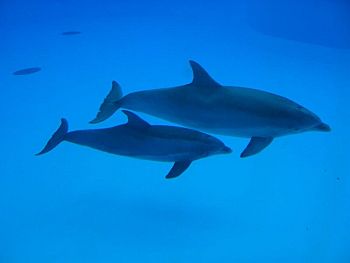 Definitely another attraction for all the family, as the dolphins perform their amazing acrobatic feats, with leaps out of the water as high as 20 feet!

One time I was there, some children were picked out of the audience, placed carefully in a little boat, which a dolphin proceeded to tow around the pool.

My advice - bring your cameras!

Loro Park possesses four Orca whales in a comparatively recent addition to the attractions. Living in a carefully controlled environment that uses 22.5 million litres of sea water, the animals are looked after by a team that trained for two years at "Sea World", in the USA. 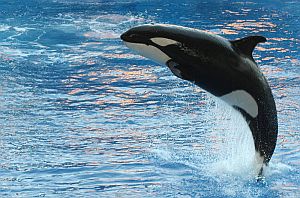 Taking place three times a day, the Orca show proves that dolphins are not the only intelligent aquatic mammal.

Loro Park has constructed the largest replica of the Antarctic environment in the world to house its collection of these amusing, flightless birds. 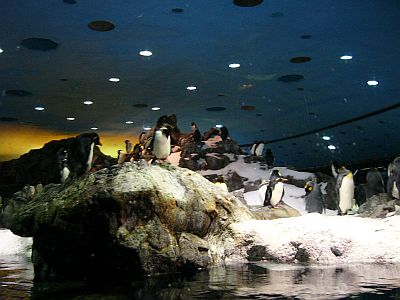 You will certainly feel the cold as you make your way through the exhibit, as the temperature is kept to a constant 0º.

Watch fascinated as the comical creatures go about their daily business.

Taking place in a large enclosure, the sealion show features the acrobatics and, let's face it, cheekiness of these charming aquatic mammals.

The pool has glass sides, so you can see all the effortless underwater manoeuvering. 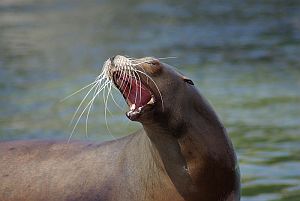 What is truly remarkable is the interaction between the animals and their trainers, showing the amount of love and trust that has been built up over the years. The show takes place five times a day.

One of Loro Park's newer attractions, it is named after an Australian aboriginal word, meaning "song birds".

It is a free-flight area for exotic birds, enclosed in mesh, where, in its enormous space of over 600,000 cubic feet, the birds can fly freely. With a tropical jungle setting, similar to those found in Australia, the birds feel totally at home.

Visitors will be able to see many species of parrot (of course), plus cockatoos, kookaburras, pheasants, doves and herons. There is a large central lake, occupied by water birds such as Mandarin ducks.

Katandra Treetops is equipped with various viewing platforms, the most impressive of which is a high, hanging bridge, to take visitors up to the height of the birds as they fly. There are also walkways and steps, leading to otherwise inaccessible areas of the display.

Loro Park is celebrating its first love - birds - in this stunning exhibit.

Under a large glass dome, you'll find the cinema attraction "Naturavision". Here you'll be taken around the world in film, witnessing all the real environments represented in Loro Park.

The Aquarium, a display using over one million litres of water, reproduces the ecosystems from all over the world, to display all manner of sea creatures in their natural habitat.

There is even a coral reef, constructed from volcanic rock from the south of Tenerife and covered with living coral imported from Indonesia.

Don't miss the 18 metre long shark tunnel, where you can see these intimidating sea predators swimming inches away.

Elsewhere in the zoo, you can see gorillas, chimpanzees, tigers and alligators. 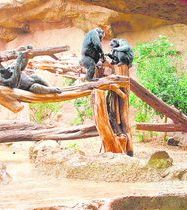 The park has just opened a brand new chimpanzee enclosure, packed with intricate climbing equipment and other features that the lucky primates love to interact with - much to the amusement of onlookers.

The park has also recently acquired no less than 10 giant tortoises. Known as African spur tortoises, they have settled into their new home and provide yet another interesting thing to see in this remarkable zoo. 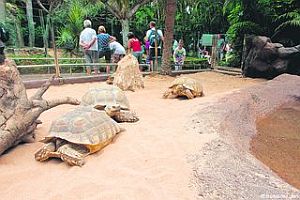 If it's exotic scenery you're after, then Loro Park boasts no less than five contrasted areas.

Something For The Kids

At Kinderlandia, you'll find a great play area for younger visitors (and older ones too, if they feel like it).

It is set out to resemble an African village with huts in the trees and featuring such diversions as hanging bridges and snake slides. Don't miss the new Orca Roller Coaster!

For the adults, there is an authentic Thai village, reached by crossing a bridge over a lake containing priceless koy carp. This area also houses the Parrot Museum, where you can see a huge collection of parrots, represented in porcelain, crafted by famous artisans.

Loro Park provides no less than eight bars or restaurants, where you can rest and enjoy a drink or a bite to eat, while surveying the Park's magnificent views.