The Tenerife Symphony Orchestra, or Orquesta Sinfonica de Tenerife, known more familiarly as the OST, first started life back in 1935, initially being called Orquesta de Cámara de Canarias, or the Canary Isles Chamber Orchestra. It was only in 1970 that the collection of musicians became a fully fledged symphony orchestra and the OST was born. 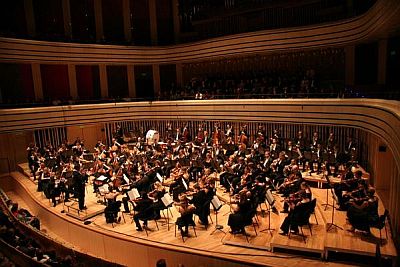 This isn't actually the OST - it's just to show you what a
symphony orchestra looks like, if you've never seen one

During the 1980s, the OST enjoyed a period of continued success, swiftly becoming recognised as a major musical force on the international orchestral stage. At the start of the 21st century, it is still going from strength to strength.

These days, the OST is based at the Auditorio de Tenerife, the striking white building situated by the sea in Santa Cruz. It provides an annual programme consisting of some twenty events. During the season, it also diversifies, with special concerts for schoolchildren, participation in such events as the Canary Isles International Music Festival and the Tenerife Opera Festival, in addition to undertaking international tours and spending time in the recording studio.

Over the years, the OST has worked with many celebrated musicians, such as operatic tenor Plácido Domingo, the violin virtuoso Kyung Wha Chung and piano maestro Krystian Zimerman. All guest artistes invariably offer high praise to the quality of the orchestra's playing - both in sound quality and the cohesion of the different instrumental sections.

For full details of the OST's calendar of events, you'll need to refer to the orchestra's website.