Vilaflor walks. There are several varied walks starting from, or ending at, the highest village in Tenerife. Although all the paths you will be using are well maintained, there is some uphill walking involved, so make sure you're up to it! 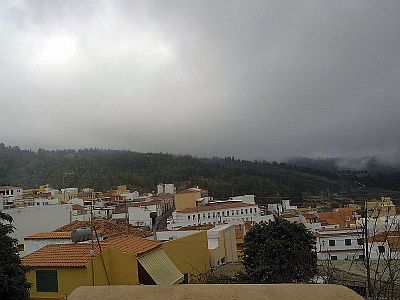 Your start or end point (let's hope the view's better on the day!)

There is a well-worn path leading to this famous landmark of Tenerife. Known, in Spanish, as Paisaje Lunar, this area is reached via quite a steep ascent, but you will be treated to stunning views of mountains, canyons and pine forests.

The overall distance is some eight miles, a third of which is uphill! You'll be treated to a long descent to finish it off, though.

Vilaflor, There and Back

You walk in a giant circle that takes you through one of Tenerife's wine growing regions. There is a new, official, hiking footpath that forms part of this route. Called the GR131, it is distinguished by the presence of red and white stripes.

The walk takes you through ravines and pine forests and into some quite remote places. With only one and a half hours of uphill walking, this is quite a nice, easy hike. You cover about eight miles and should complete it in around four hours.

Vilaflor to the Mirador La Centinela

This is a very easy walk - nearly all downhill - but with stunning views. The leisurely excursion passes through pine forests on easy footpaths and dirt tracks. There is a brief ascending bit of only 400 feet, but, otherwise, not strenuous at all.

You're rewarded at the end of this walk. The Mirador La Centinela is a really nice restaurant with absolutely superb views.

This walk begins at the Parador de Canadas, a hotel nestling in the foothills of Teide. It involves firstly a climb out of the volanic caldera, an ascent of some 1000 feet (even though your starting point is already 7000 feet above sea level). From the vantage point on the caldera's rim, the views are spectacular. The whole of the National Park is laid out before you, with Tenerife's highest mountain as a backdrop.

Thereafter, you have a long, leisurely descent of some 3300 feet to Vilaflor. The whole thing takes around five hours.