Teno cycle routes. Teno is the part of Tenerife that was once one of the original volcanic massifs which eventually merged with its other two neighbours to form the island we know today (see my page on Tenerife geography). As such, it is very mountainous and offers some big challenges for the serious cyclist. 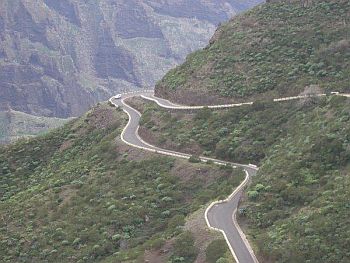 Here are a few suggested routes.

This is generally regarded as "hard" ride of just over 70 miles. It begins and ends at La Orotava and has Masca at about the halfway point. It can take between five and six hours, depending on how fit you are!

The altitude of La Orotava is about 1,570 feet and, after a descent for a while, you are faced with a steady climb aiming for Puerto de Erjos, at 3,670 feet, no less! Thereafter, you make the descent into Masca. It's quite hair-raising, with acute bends aplenty and the braking necessary might melt your brake pads if you're not careful.

The unbelievably picturesque village of Masca is an excellent stop-off point for a rest and a drink.

You leave the "lost village" and climb some way, to arrive at La Tabaiba. There is a very long descent next, aiming for the coast, where you will pass through Buenavista del Norte and Garachico, eventually following the coast road back to your starting point, La Orotava.

This route of about 50 miles takes about three hours and is a relatively easy ride. The difference in altitude covered is about 4,500 feet and you're at an average altitude of 650 feet.

This route starts and ends at a place called Los Pinos. Unfortunately, I've been unable to find this place anywhere on a Tenerife map. All I know is that it's situated at sea level, so is probably on the coast somewhere.

In any event, the ride takes you along proper roads and your first port of call is Icod de los Vinos, home of the famous Dragon Tree.

From there, you ride along the coast road to Garachico. This takes you back to sea level, but then from there is a stretch of about 24 miles, moving inland, where you are gradually climbing around 1,700 feet, to get you to the town of El Tanque.

Finally, you take the TF-82 road back to Los Pinos, a stretch of undulating altitude.

There are good coastal views to be had throughout this ride and, as it is reasonably flat, is one that the amateur rider can undertake.

To cycle 50 miles, you do have to be reasonably fit, though!

This is a round trip beginning and ending at La Orotava, taking in Garachico and Icod de Los Vinos on the way.

Although it is a ride of just under four miles and can be completed in about half an hour, it is one of the most gruellingly difficult routes on the island.

This is because you have to climb Tierra del Trigo. Although the actual ascent is a mere one third of a mile, there is an overall ascent of one and a quarter miles where the average gradient is 15%. That's really steep!

For this reason, this route has been designated one of extreme difficulty and one that should be only attempted by cyclists with a very high level of fitness.

You'd better make sure bike is in good condition, too.

Fortunately, the remainder of the route after this arduous ascent seems flat as a pancake!