Moving further up the west coast, into the Santiago del Teide municipality, we are fast approaching the major resort of Los Gigantes. But there are a couple of notable beaches first.

This has the imaginative translation of "beach of the sand". For this reason, you can imagine, there'll be a few others round the island with the same name (even ones with no sand!).

This one, however, is the most notable. A mere 500 metres from the village of Puerto de Santiago, this grey sand beach is set in a beautiful, sheltered cove and has been awarded the Blue Flag every year since 1989, which is almost a record throughout the whole of Spain.

With its westerly aspect, it receives the most hours of sunshine possible and is crammed with facilities - changing rooms, showers, sunloungers and umbrellas . There are pedalos for hire and the beach backs onto a nice garden area, beyond which there is a promenade packed with bars and restaurants. 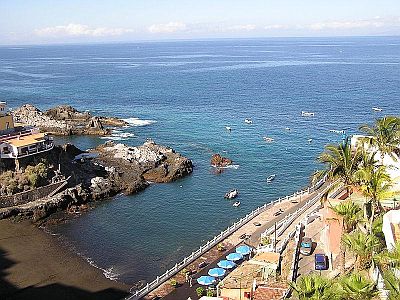 Right next door, we find this small fishing village and minor tourist centre. As you can see from the photo, there is a small, grey sand beach, but, with the excellent one described above a five minute walk away, most people go there.

Next, we finally arrive at a major tourist spot. As the town is named after the gigantic cliffs along its coastline, you'd expect there to be not much in the way of beaches.

The town does have a beach, however and, as well as being referred to as "Los Gigantes beach", it also has the distinction of having two official names - Playa de Los Guios and Playa Argel. Don't ask me why.

This stretch of grey sand is most notable for the surrounding views of the amazing, rocky cliffs and is quite close to the harbour, so you can amuse yourself watching the comings and goings of all the boats.

There are deckchairs for hire and showers are available.