Tenerife Beaches Santa Cruz - two major ones and a few others

Swiftly rounding the extreme northeasterly tip of the island, where the coastline is very rocky, we begin to travel down the east coast, heading for the island's capital, Santa Cruz.

Now, the coastline starts to feature bays and inlets, some of which may have a beach. This bay is the first one we encounter along the east coast and is a very picturesque area, with a rocky expanse upon which the waves lap gently.

The downside is that it is so remote, you'd have to be either a mountaineer or a sailor to get to it.

Right next to Antequera is an attractive, grey stretch of sand beside a gentle sea. It would make an ideal sunbathing spot, but for the fact it is as inaccessible as the previous one.

Moving gradually further south, we finally arrive at civilization again, in the shape of the tiny village of Igueste de San Andres. It is perched right on the shoreline and has its own beach.

Here it is possible to indulge in various water sports, such as snorkelling and it is also an important spot for surfing.

We're almost upon the important beaches of Santa Cruz itself, but firstly, there is a small cove consisting of a secluded, quiet swathe of sand and rocks that you could possibly have all to yourself, because, just next door is... 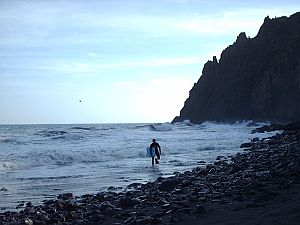 The first of Santa Cruz's two major beaches. This photo doesn't really do it justice and, contrary to how it appears, is not all rocks. It has a 200 metre stretch of grey sand and is a lot more intimate than its glamorous neighbour, featured next.

One important thing to be aware of regarding Las Gaviotas is that it is a recognised nudist beach - you have been warned.

Apparently, it can get very busy in the summer. Bare bodies galore!

Here at Tenerife's capital, Santa Cruz, we have, quite fittingly, one of the island's finest and most spectacular beaches. 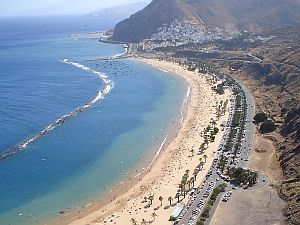 Its setting is idyllic, too. Crescent shaped, with gentle waves lapping in and framed by palm trees, it offers a dramatic view of the mountains.

The calm sea makes it ideal for families. The one small drawback is that, as it's on the east coast, it can be quite windy - but that's a small price to pay!