We're quite a way up the western coast of the island now and the first settlement we arrive at it the small village of Abama. The main attraction of this place is the presence of a top-class golf course.

It does have a beach, however. It looks like it might have been artificially created, but it features a very attractive stretch of golden sand. Sunloungers are provided.

You may have heard, or read, that access to the beach at Abama is quite difficult, as you can only get to it by going through private land, or boat, but I think this refers to the old, natural beach, which is quite rocky anyway. 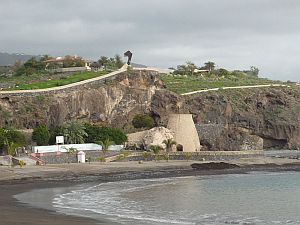 Further north, we reach the fishing village of Playa de San Juan. Is the town named after the beach, or the other way round?

Whichever the case, this is a nice crescent of sand, sheltered by the harbour wall. Originally, it was a rocky beach, but has been artificially transformed. The rocks are starting to make a comeback, though.

With a backdrop of planted palm trees, the area features changing rooms and umbrellas. I don't think there are sunloungers, however.

As Playa de San Juan is not a major tourist spot, this area never gets too crowded.

Next along is the village of Alcala. The beach there is called Playita, which means "little beach". That's not kidding, as it's a small swathe of sand about 50 yards across!

Essentially, it a small break in the rocks where the sea laps in. You could pop down there for a spot of sunbathing and, believe me, you'd have the place to yourself.