Teide cycle routes. The obvious area for cycling in Tenerife, as it contains some magnificent scenery. As you can imagine, though, some of these Teide cycle routes are extremely demanding and should only be attempted by expert cyclists with a very high fitness level. 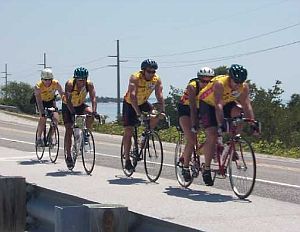 Here are a few suggested routes, arranged from "very hard" to "easy".

The Ascent to Izaña

This ride could be considered one of the best on the island, due to the spectacular views it offers. It is also one of the most arduous, as you have a lot of climbing to do and, to complicate matters, the air becomes very thin the higher you go, depriving you of oxygen just when you need it.

You're aiming for the high point of Izaña, where the astronomical observatory is. The route begins and ends at La Orotava and, initially, you make your way from this town on the TF-21, heading north east, which eventually becomes the TF-217, hugging the TF-5 north motorway. The actual start of the ride proper is La Esperanza and you'll have already covered around 20 miles!

From La Esperanza, you begin to climb, taking the TF-24 road up into the mountains and, from then on, you need to make sure you're well stocked up with water.

This road will take you up to the highest point in the ride, after a steady climb of some 26 miles! Thereafter, sticking to the TF-24 will start your descent and, after some twists and turns through the forest roads, you'll come to the TF-21, where you should turn right.

Eventually, you'll arrive at the village of Aguamansa, where you can enjoy a well deserved rest and a drink.

The TF-21 finally dscends back into La Orotava.

This route is classed as "very hard" and should only be attempted by extremely fit athletes who are used to high altitude cycling.

Teide from the South

Of course, the ascent of Teide is a cycle challenge that may appeal to many riders, but, contrary to the obvious option - approaching from the north - a far more difficult ascent is to set off from the south.

Although you can start from the main southern resorts, you may find that, sometimes, the roads aren't too good. The best place to start this ride from is Granadilla de Abona.

You initially take the TF-21 road, which takes you to Tenerife's highest village, Vilaflor. After an optional rest (where you should make sure you're well stocked up with water), you continue on up this road, until you reach the base of the mountain. You'll be travelling through Teide National Park and some of the views will be spectacular.

The big thing to look forward to is the return journey - it's all downhill!

The Ascent of Teide

The more obvious route ascending Mount Teide, you can begin this ride at Puerto de La Cruz, but, initially, you need to make your way to La Orotava.

From there, take the TF-21 road, which will simply take you up towards the base of the mountain.

Throughout this ride, the scenery is ever-changing, but always amazing - you'll pass through the Orotava valley, the pine forests and the "lunar landscape" feature, of which Teide is famous.

The village of Aguamansa is a handy place for a rest and a drink and, thereafter, you continue on to the end point of this ride, El Portillo.

This route is classed as "hard" and covers some 47 miles, with an overall climb of nearly 8,000 feet.

It's not all really difficult climbing! This ride takes you up the picturesque northwest coast. Starting, once again, from La Orotava, on the TF-21 heading north, this road eventually becomes the TF-217, running alongside the TF-5 motorway. Eventually, this becomes the TF-224 and you'll cross over the motorway.

Thereafter, you'll be on the scenic coast road and this route will take you through small, traditional Tenerife villages, such as Santa Ursula, La Victoria, La Matanza, Tacoronte, before reaching the theoretical end point, Tejina. I say "theoretical" because there's an option, from there, to continue north on the TF-13 road, which takes you up to Bajamar and Punta del Hidalgo.

You then retrace your route back to La Orotava.

Designated a route of "moderate difficulty", this ride covers around 60 miles and has an overall altitude climb of around 5,000 feet.

This is a route along an unbelievably winding road skirting the southeast area of the mountain. Starting out from Granadilla de Abona, you take the TF-28 road and, apart from the views you'll be able to enjoy, you'll be passing through such picturesque villages as Chimiche, Arico, Fasnia and Guimar.

Just after Guimar, branch off the TF-28 onto the TF-525, to the left. This will then take you to Arafo. All in all, a not too strenuous ride.

Classed as of "moderate difficulty", this ride covers 87 miles (there and back) and has an overall altitude climb of just over 1,640 feet.

A very pleasant, undemanding ride through a fertile farming area, this begins at Palo Blanco (which is near Los Realejos). Take the TF-326, which will lead you to the village of Benijos.

Stay on this road until El Camino de Chasna, where you can join the TF-21 road (turning left), which will descend gradually into La Orotava, your finish point.

Classed as "easy", this route covers about 25 miles and involves an overall altitude climb of just under 2,000 feet.