Teatro Leal is an important, cultural landmark in La Laguna, but it has had a rather chequered history.

Its creation was initiated by a certain Antonio Leal early in the 20th century. Construction began in 1912 and was completed by 1915. 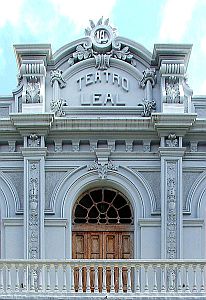 Over the following decades, although being used for performances of plays, concerts and suchlike, it succumbed gradually to the ravages of time and became somewhat delapidated.

In 1984, it was decided that something should be done about it and the theatre was added to the list of buildings that should be restored.

As is the case pretty much anywhere in the world, nothing was done and things reached a climax in 1990, when it was necessary to close the building to the public, because of problems with the roof.

Again, things moved agonisingly slowly and it wasn't until 2000 that a restoration project was proposed and accepted. The work began the following year and was completed by 2008. Teatro Leal opened its doors again in September of that year. 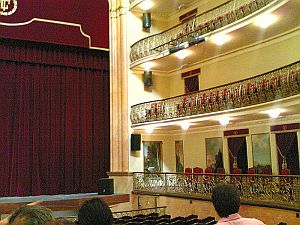 The exterior of this striking building is richly adorned with Baroque-like images of humans, animals and plants and was the creation of artist Manuel López Ruiz. Born in Cadiz on the mainland, he eventually moved to and settled in Tenerife in 1895.

Primarily a painter, he established himself as a creater of fine seascapes and was subsequently approached and commissioned to work on public buildings, including Teatro Leal. As well as the exterior, he produced numerous superb murals adorning the walls of the interior.

This theatre, in its present form, seats 608 people and has a stage of sufficient size to accommodate such large music ensembles as the Tenerife Symphony Orchestra, who frequently perform concerts there.

Of course, plays are regularly presented, plus many first screenings of motion pictures on their release.

Other cultural activities housed by the theatre include poetry readings and carnival balls, ballet and musical shows with featured artistes.

The theatre can be found on Calle Obispo Rey Redondo, which is just off the TF-121/TF-263 road accessed by leaving the TF-5 north motorway at junction 8B.