Many cities have them - those open-topped buses that follow a route taking in landmarks, shops and other places of interest.

Now, Santa Cruz has them too! In March, 2011, there have been five of these buses put into operation with the intention of "bringing the city to visitors". Eventually, there may be more vehicles added to the fleet.

These bright red, open-topped buses seat 72 passengers and are equipped with wheelchair access. On board, there will be a recorded commentary, available in several languages. 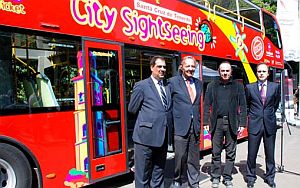 Aimed at boosting the Santa Cruz tourist industry, these tours will promote the city and, hopefully, strengthen its image as not just a vibrant, cosmopolitan place, but also an area packed with fascinating architecture and other features.

With the tourist firmly in mind, there may be special discounts available at the many stores included in the tour.

Essentially, the buses drive round and round a predetermined route, designed to take in most of the many interesting sights Santa Cruz has to offer. If you chose to sit on the upper deck, you may find yourself having to occasionally duck under overhanging branches as the vehicle passes along various tree lined avenues, but you'll also be privy to the fantastic views from up there. 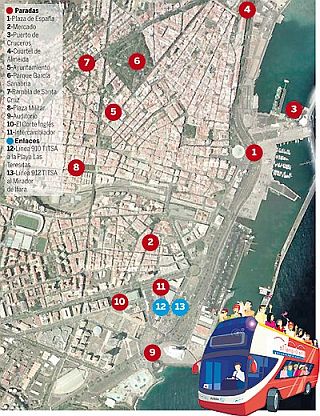 the stops the bus will make

Buses will run every 20 minutes between the hours of 10am and 6pm, every day of the year. A ticket will be valid for one day and, during that time, its holder may hop on and off the bus as many times as he wants. The whole round trip takes about 45 minutes.

Important stop-off points include the Cabildo building, the Plaza de España, the Mercado Nuestra Señora de África and the Ramblas.

As the Mayor of Santa Cruz, Miguel Zerolo commented: “We are seeing the start of a very necessary service coming into being, that of a tourist bus to see the sights".

tickets available from the city's many information booths,
hotels and the actual bus stops