The Roque del Conde Walk - not too demanding, but with superb views

The Roque del Conde walk is graded as "moderately easy". It is a good one for hikers with not too much experience. The mountain is the familiar table-topped one behind Los Cristianos and is about 3,300 feet. Not as impressive as its more majestic counterparts around Teide, but, to put it into context, it is almost the height of Mount Snowdon, in Wales. The hike can be completed in between three to four hours. 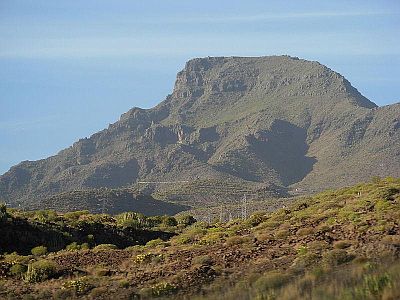 The Roque del Conde walk starts from Vento, which is an area of Arona. This is found on the TF-511 road, plus there are also buses from Los Cristianos, numbers 480 and 482, which leave every hour on the hour. The walk is clearly signposted from the main road there. The actual path begins between two houses and takes you initially through Las Casas ravine, then another, named Las Arenas. You'll see a profusion of cacti and other vegetation.

Then, the route drops steeply into the deep gorge of Barranco del Rey. At this stage, you'll find yourself walking on an old cobbled path - evidence that the area was once extensively farmed. This is reinforced by the presence along the route of derelict buildings, abandoned years ago by local farmers.

Coming out of the ravine, the climb proper begins, winding round the left side of the extinct volcano (yes, relax, it is extinct!). There are two stages to the ascent, as the mountain has two tiers, so, when you reach the first one, it's a good place to stop and rest awhile. The views from there are already stunning, but it's worth pressing on to the top.

The final part of the climb is quite steep, then you reach the flat summit, to probably be amazed at its area. Think two football pitches! You'll also see ancient evidence of farming up there, too. This flat area actually slopes slightly and, at the actual highest point, there is a concrete marker.

It is at this point that you reap the reward of the exertion of the walk - the view! The whole of the south coast of Tenerife is spread out before you and, on a clear day, you can see four other Canary Islands: La Gomera, El Hierro, La Palma and Gran Canaria. In the other direction, the imposing mountains of Teide and its neighbours dominate the skyline.

On this route, you ascend some 1,300 feet and cover a distance of nearly four miles.