The row of bars adjoining the Paloma Beach complex have been in operation for many years.

Some have remained, pretty much unchanged (except, I suppose, for the occasional refurbishment) since the year dot. Bars such as the Penny Farthing (my first residency when I arrived in Tenerife) and the Spanish Olaff's, plus the restaurant Surrey Arms all seem to still be going strong.

Sandwiched between the Surrey Arms and the excellent restaurant Rumours is a bar that, back in my day, was called "Scotch Corner", manned by a nice Scottish couple whom Alison and I got to know quite well.

These days, the bar has been renamed the Polygon and, since the change, has had a number of different people running it. 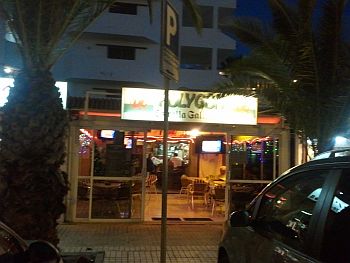 In its present incarnation, it seems to be a venue for enjoying a drink whilst watching premier league football on the several TV screens dotted around.

Quite a small venue, it boasts an enclosed terrace area. To be perfectly honest, I don't know if it's open during the day, but it's certainly a place to stop off for an evening drink.

The Polygon does provide some evening entertainment, too.

Appearing six nights a week and alternate Sundays is my old mate Terry Paul, who was, for many years, resident compere at the now non-existant Church Bar, just up the road.

Terry primarily hosts a karaoke session, but can also be relied upon to take up his guitar and provide a few songs himself.

Alternating Sundays with him is someone billed as "Owen the Crooner".

At the present time, the bar is lucky enough to have appearing, every Thursday at 10pm, top Tenerife cabaret act Cy Benson. 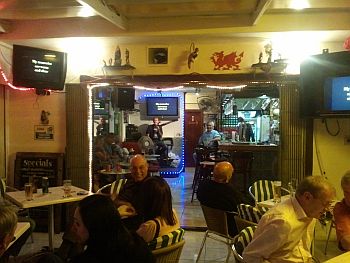