Palo Canario literally translates as "canarian wood" and is a form of martial art, that of fighting with sticks. There are a couple of theories as to its origins.

One is that it derived from techniques used by camel herders in Africa, who used sticks to control and tame the animals. Some of thesecamelleros eventually migrated to the Canary Islands and their dexterity with sticks developed into what amounted to a martial art. Hence, this sport can also be called Palo Camellero.

Another idea postulates that, as with so many things on Tenerife, it originated with the Guanches, Tenerife's original, indiginous population. They had developed great skill in fighting with sticks, as the Spanish found out to their cost during their invasion of the island.

Once the Spanish were in charge, they passed a law forbidding the carrying of sticks and the martial art had to be practised in secret. Still, the art did not die out. It even survived another purge, when, during the Spanish Civil War, it was forbidden again.

The net result was that the techniques of this martial art were maintained, with some degree of secrecy, by certain Canarian families and each, over the years, developed their own styles.

Today, the art is practised more openly, with some schools actually opening clubs to teach it. 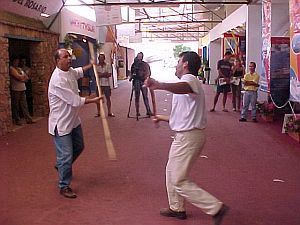 Well, it's just a stick, you might be thinking, but this art features three different stick sizes:

Palo Canario is strictly a non-contact sport, as a blow from one of these sticks administered by an expert can result in serious injury.

It is between two people and the aim is to "intend" blows to your opponent - that is, carry out the manoeuvre, but stop short of connecting. The opponent parries the intended blow and the aim is to acheive a smooth, continuous flow.

During each game, there is a referee to keep an eye on things, calledHombre Bueno, or "good man".

These days, there are several familes in Tenerife practising the art. The families of Acosta, Denis, Verga and Morales all have their own subtle variants on the basic style.