O'Jangles Tenerife - a new Irish bar on the island

Yet another Irish bar in Tenerife, O'Jangles is also one of the youngest, only opening its doors towards the end of 2009. 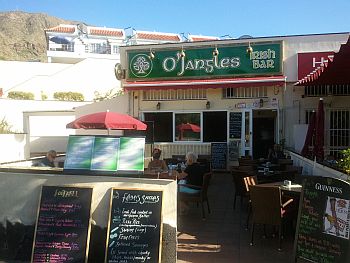 The premises themselves are reasonably spacious and any overspill from the customers can be accommodated on the outside terrace.

This bar/restaurant is open all day and offers breakfasts, as well as other, British-style dishes through the day. There is a kids' menu and, every Friday, the place turns into a traditional fish and chip shop with all the inimitable dishes associated with that perculiarly British institution. A seven-day main menu is also available, plus traditional Sunday lunch.

Although the venue is Irish owned and run, when it comes to the entertainment on offer, it is not Irish-influenced. Indeed, there is a remarkable variety through the seven days.

From heavy rock, to risque comedy, to Motown tributes, this bar has the lot. Unfortunately, I'm not too sure about the starting times of the live entertainment, but it is generally advised that you get there reasonably early, to ensure getting a seat.

Drinks prices, I gather, are reasonable.

How To Find It

Starting from the mini roundabout near the Arona Gran Hotel, walk up the hill away from the sea (not parallel to the sea - if you find yourself approaching the Princesa Dacil Hotel, you've gone the wrong way).

There's a reasonably long walk involved. Eventually, you come to a large roundabout, where you should go straight on. A short while later, there's another, smaller roundabout. The bar is there, on the corner, on the right.