Motorcycle Tours in Tenerife. For the more observant amongst you, I'd originally called this attraction "Tenerife Trial Tours". This is (or, maybe, was) the name of a company that offered guided tours, on motorcycle, around Tenerife, both on and off-road.

Unfortunately, the company with this name seems to have disappeared off the map. Their website (www.offonroadbikeholidays.com), apparently, no longer exists. I can't find it anyway.

But don't panic! There is another company offering guided tours on motorcycle.

Situated in Adeje, near Playa de Fañabe, this company offers a variety of guided motorcycle tours. Here is an example of their 7-day tour:

There is an optional extra trip to the neighbouring island of La Gomera. After a 35 minutes journey on the express ferry, the tour takes in Playa Santiago, the Valle Hermoso, Hermigua and El Cedro.

If you think this is a little steep, please be aware that these prices are for a full motorcycle tours in Tenerife package and include seven nights, half-board, in a four-star hotel, seven meals, airport transfers, motorbike rental and the use of a tour guide.

There are also other, shorter tours available, on request.

If you want to organise your own motorcycle tours in Tenerife and just need a machine, CanaryMoto also rents out a selection of quality motorcycles, all less than 18 months old. They stock bikes from Kawasaki, BMW and Honda and hire prices per day range from 39 to 119 euros. Quite a big difference, but you get what you pay for. Top of the range is a Kawasaki 1400 GTR sports touring bike. 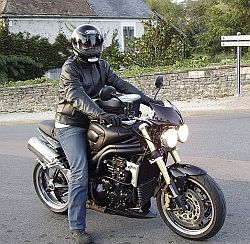