The Military Museum Santa Cruz is more accurately known as the Museo Militar Regional de Canarias, or "Regional Military Museum of the Canary Islands". It occupies a large, roughly triangular area in the island's capital, flanked by Rambla General Franco, Avenida Francisco La Roche and the street where you find its entrance, Calle San Isidro.

The Museum started life, in 1854, as a military fort, guarding the shoreline of Santa Cruz against attacks from the sea. Back then, it was called Fuerte de Almeyda, or Almeyda Fort and, indeed, it can still be called the Military Museum of Almeyda today, as an alternative name.

It was the headquarters of the Tenerife Artillery Regiment for many years, then, as recently as 1940, was turned into the Museum you can visit today.

As the Museum occupies such a large area, the buildings are set in extensive grounds and, on entering, you are first confronted by a tank - an American M41 Walker Bulldog. Off to the right are examples of field guns used in the two world wars and the Spanish Civil War. Elsewhere in the grounds, you'll be able to find various military vehicles, including two decommissioned military helicopters, an Iroquois UH-1 and a Sioux OH-13. 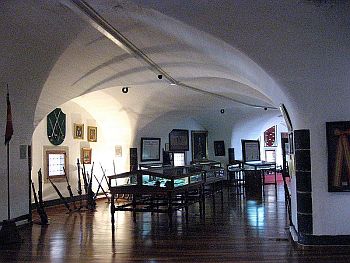 As you enter the building, you are confronted by various guns from different eras, ranging from the 16th to the 19th century.

Climbing some steps to the first main room, you'll find a comprehensive collection of small arms.

Literally meaning "the deed of the 25th of July", this refers to the battle between Santa Cruz and the fleet of Rear-Admiral Nelson.

You'll see a couple of captured British flags, plus various paintings and documents concerned with the event. 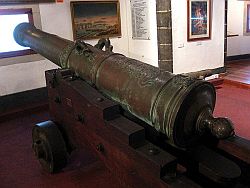 The centrepiece of the exhibit, however, is the cannon known as El Tigre, or "the tiger". This was used in the battle and is reputed to have been the one that hit Nelson on the arm, resulting in it being amputated.

This is a large room that features a huge scale model of Santa Cruz as it was in 1797 and depicts the attack on the city by Rear-Admiral Nelson's fleet. All his warships are represented, as are all the geographical features and buildings of the day.

This impressive model is a testimony to the skills of the Tenerife Models Club.

Here, you'll see on display some very old and revered military standards, such as were used in the Spanish Civil War. Also featured are the banners of the Canarian Militia who defeated Nelson.

This hall contains scale models of all the forts that have defended Santa Cruz through the ages.

A room displaying weapons used by the invading Castillians and also some more primitive weaponry employed by Tenerife's indiginous population, the Gaunches.

The Military Museum Santa Cruz is dedicated to the memory of all who have served over the years to protect the city and the island.