El Mercado Nuestra Senora de Africa, or "Market of Our Lady of Africa", is a famous and imposing collection of market stalls, shops and eating places located on the Avenida de San Sebastián in Santa Cruz. 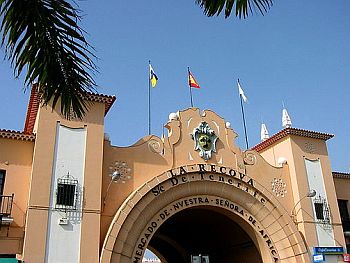 This large, salmon coloured building takes up a huge space just to the south of the Barranco de Santos, a gorge that runs through the city. These days, this gorge has roads in it, but, back when the market was first built, it was just that - a gorge - marking the natural boundary of Santa Cruz to the north, which was much smaller in size than it is today.

This large, fixed market was originally constructed under the jurisdiction of a certain General Serrador, a veteran of the Spanish Civil War. He decided that the existing market, on the northern side of the barranco, was too small to accommodate the ever-increasing volume of people and resulting trade.

This decision, made back in 1942, was the first step in the expansion of the city and, building on the south side of the barranco necessitated the construction of a bridge across it.

This bridge still exists (along with, now, many others) today and is named after its builder: General Serrador Bridge.

The name of the market is in honour of the General's wife.

This market soon established itself as the major centre for food trade and distribution for not only Santa Cruz, but the whole of Tenerife. Its golden era was the 1960s.

A possible crisis loomed in the 80s, with the appearance of chains of supermarkets and hypermarkets. Many other fixed markets went under, or were bought out by the supermarket retail giants, but Nuestra Senora de Africa managed to survive, due to its history, popularity and the quality of its produce.

A further crisis occurred as recently as 1995. The market, answerable to the Santa Cruz Town Hall, was being swamped by bureauocracy. Council decisions were slow to be made, there was a complete absence of any trade policy and the market was being allowed to fall into disrepair. Members of the council dealing with the Market were always changing, so there was no continuity in decision making.

All this changed in July of that year, with a totally new outlook on the upkeep and management of the Market. There were many additions and improvements:

These measures have helped the Market go from strength to strength.

There are three main areas in this giant market complex, plus a central courtyard:

This takes up most of the building and its surroundings. You will find various stalls around the outside, selling fresh fruit, vegetables and flowers, interspersed with cafes and eating places. There is also a supermarket on the bottom floor.

There is also a large fish market, a meat market and a "foreign market".

This is a smart, covered area which is a shopping mall. Indeed, it is otherwise known as "The Mall" and gets away from the foodstuff stalls and features such retail outlets as clothing and other fashion items.

This is a collection of stalls and kiosks on the outside of the building characterised by their blue colour and bright, stripy blue awnings, hence the name.

The shade from the awnings mean you can browse the various stalls out of the sun.

This central area is a place to take a break and sit and have a drink in one of the cafes.

It also features a recently included attraction, Nenelandia, which is a children's playground. This was added to attract more families to the market.

The courtyard is also used for such things as wine tastings and live musical performances.

The Market boasts no less than 12 different eating places:

How To Find It

The Mercado Nuestra Senora de Africa is situated not far from the sea and quite near the main thoroughfare Avenida Tres de Mayo.

A good idea is to look out for the tower, in itself a famous landmark of Santa Cruz, and aim for that.