MCC La Laguna - museum of science and the cosmos

The MCC La Laguna, which stands for Museo de La Cienca y El Cosmos, or "Museum of Science and the Cosmos", is found on Calle de La Via Lactea, which translates as "street of the Milky Way"! Nice. 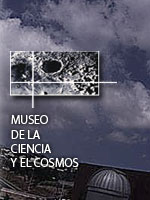 This impressive, salmon-pink, mainly windowless building takes up quite a large area and is notable for the huge radio telescope dish on its roof. Just for good measure, next to that is a dome housing an optical telescope.

The museum was only opened as recently as 1993 and states that its aim is to be both a traditional museum and, in its own words, "amusement park". Its very laudable goal is to popularise what could be difficult topics for the lay person, such as the origins of the universe and the laws governing natural processes.

As well as being a popular science centre for the general public, it is well known as a valuable teaching resource for serious students and teachers.

The MCC does not exhibit artefacts, as such. It concentrates more on ideas and experiences. There are around 100 interactive exhibits, based around three themes:

There is also another space to be opened soon called "Planetary Environments", where visitors will be able to take a virtual trip into space.

Free entry to everyone on Sundays.