Magma Art and Congress - a cultural centre in the south

The Magma Art and Congress building is a striking, unusual edifice situated next to the TF-1 motorway in the Adeje region of the south of the island.

First conceived back in 1998, its creation was eventually brought to fruition in 2005, when it was officially opened by Juan Carlos I and his wife Sofia, the king and queen of Spain.

Originally planned as a straightforward conference centre, its design was modified during construction to produce excellent acoustic properties for the various spaces within it, thus making it ideal for all manner of cultural events.

Since its inauguration, it has become an iconic centre for artistic happenings and is now the south Tenerife rival to the Auditorio de Tenerife, in the north.

The Centre has four main areas, but the beauty of the design is that there are moveable walls which can create separate rooms within these spaces.

The Hall and Main Entrance

Covering an area of over 13,000 square feet, this houses a reception area and ticket office and also features a cafe and exhibition area.

A space of just over 30,500 square feet, this also houses a huge stage. Without dividing walls in place, it can hold up to 2,500 people. It can be subdivided into smaller rooms for various types of function.

Situated on the first floor, this is over 20,000 square feet and can be subdivided into five smaller rooms.

Nearly 50,000 square feet, this outside area may be augmented with marquees and performance areas to stage all manner of entertainment events.

Although some deference is made to the volcanic nature of Tenerife with some of the Centre's building materials, the structure is created mainly from concrete.

Of deliberately rough appearance, its irregular shape was intentionally conceived to combine power and fluidity.

For details of current events, you'll need to check its website. 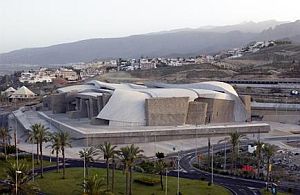 To find the Centre, exit the TF-1 motorway at either junctions 28 or 29, getting onto the TF-481 road. You can't miss the building and there is ample car parking space.