The origins of Leroy Merlin date back to 1923, when a business was begun by Adolphe Leroy and Rose Merlin. Initially it sold American surplus, but the couple decided to change to DIY.

The company adopted its current name in 1960 and was the first of its kind to offer free home delivery.

These days, the business has grown substaintially. In 1979, it was bought by the French company Auchen and has spread throughout Europe, Asia and South America. 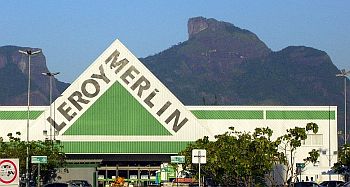 The store first established itself in Spain in 1989 and now has 45 branches throughout the country, second only to France, where there are no fewer than 108!

These stores are large, self-service DIY stores dealing in the following items:

plus much more. It is a typical, well-stocked DIY centre.

It is the policy of the company to establish its stores on the outskirts of towns and integrate them seamlessly into their surroundings.

The branch in Tenerife is just outside La Laguna, its long, white structure being quite aesthetically pleasing.

The store is situated next to the motorway TF-2 (exit Las Chumberas). This motorway can be reached from both the north TF-5 and the south TF-1 motorways.