La Loteria - the Spanish lottery and how it works

You will probably have seen the street sellers of lottery tickets in all town centres. They usually have some sort of physical disability and either sit themselves on a street bench waiting for customers, or canvas the Canarian bars.

Generally, they are selling the tickets for the game known as ONCE. This is not the English word, but is pronounced ON-say.

ONCE is only one of the selection of games available in La Loteria. If you want to indulge in any of the others, you need to go to a betting shop, a lottery kiosk, or purchase tickets online. 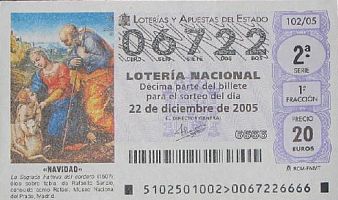 Meaning 'the fat one' in Spanish, this lottery game is so-called because of the size of its prizes. The full name is El Gordo de Navidad. It is, however, still only a nickname. The official name is Lotería de Navidad and is the oldest of the Spanish lotteries, being in operation since 1892. Even though tickets are on sale from July onwards, it is in the run-up to Christmas that the rush is on to purchase tickets.

The draw is made each year on December 22nd. This is the only remaining Spanish lottery draw that uses the "two-vessel system". They are spherical, one large, one small. The larger one contains getting on for 100,000 small wooden balls, each marked with a unique 5-digit number. The other sphere contains another 1787 balls, 1774 with small cash prizes, the other nine with the big ones. The majority of small prize balls are nicknamed la pedrea, or "the pebble avalanche".

The draw is made by taking, one at a time, a ball from each sphere. Whatever ticket number is drawn, it wins the prize on the other ball. The draw continues until all 1787 balls have been picked from the sphere and, therefore, the whole thing takes about three hours. Picking the balls from the spheres is traditionally done by children from the San Ildefonso school, which is an exclusive boarding school and the oldest in Madrid.

The children actually sing the results! The programme, understandably, is one of the most watched events in the Spanish television year.

Tickets are sold in ten parts, called décimos. The price is around 20 euros. A full ticket, called a billete, is therefore 200 euros. Because that's a touch expensive for the average person, many syndicates are formed for the big event.

El Gordo de la Primitiva, or "the fat one of the primitive lottery" is another one of the Spanish state lotteries and a watered down version of the big Christmas El Gordo, played every week.

There are two grids on the tickets - numbered 1-54 and 1-9. You pick five numbers from the first and one from the second. Each grid costs 1.50 euros and draws are held every Saturday.

It is possible to play as part of a club, or peña, where you can have 133 combinations for 5.95 euros.

La Primitiva, or "The Primitive", operating since the mid-80s, is generally regarded as Spain's favourite lottery. You purchase your ticket from one of the many official outlets and you choose six out of the 49 numbers. You can elect to have a computer randomly select them. For the numbers to be valid for one day, the cost is 1.17 euros; for two days, the price rises to 2.35 euros.

Again, you can also play as part of a club, offering 182 combinations for 5.95 euros.

The draw takes place every Thursday and Sunday. If you have all six matching numbers, you've won the jackpot. This can be as high as 66 million euros! For matching fewer numbers, there are smaller prizes.

The Lotería Nacional, or National Lottery, is also a state lottery, with tax exemption for the winners. There is a rule, however. Any money won on this lottery must remain on Spanish territory. If you take it out of the country, you'll be liable to tax.

When you buy a ticket, you don't chose the numbers. Like El Gordo de Navidad, the numbers are already automatically printed on the ticket.

All six numbers win you the jackpot. If you match the last two, you'll receive a smaller cash prize. Match the last number and you get the price of your ticket refunded.

Also, like El Gordo tickets are sold in tenths (décimos), for 20 euros.

With tickets costing just 59 centimos, this is the cheapest way to play the lottery. The draw takes place Monday, Tuesday, Wednesday and Friday. You can either choose the day your numbers are drawn, or have the numbers apply to each of the four days. This will coast 2.37 euros.

It's similar to the Primitiva, in that you select six numbers from 49. The good thing with the Bonoloto is the fact that it's drawn more often, giving you a greater chance of winning. This is counterbalanced by the fact that, as the tickets are so cheap, many more people play this game.

The name for this game is not the English word "once". Nor is it the Spanish word, which means "eleven". It is, in fact an acronym, standing forOrganización Nacional de Ciegos Españoles, or "National Organisation of Blind Spaniards".

It is a charity, running a daily lottery draw and tickets are sold by members of the organisation, from kiosks or on street corners. Sometimes they canvas the local Tenerife bars and, most often, are disabled in some way.

The tickets for Monday through Thursday and Saturday are 1.50 euros, but the Friday and Sunday tickets are 2.50, owing to the bigger prize on offer.

Each day, there are five, pre-selected numbers, with three of them in a series. If you match just the last number, you get 2.50 euros. If you match all five, plus the three in the series, you win 300,000 euros. All combinations in between win smaller prizes.

Larger cash prizes have to be collected from the Bank of Spain, but smaller winnings can be claimed at the ONCE kiosks.

return to gambling in Tenerife