The Jardines de Nivaria Hotel is found in the fashionable area of Costa Adeje at Playa Fañabé and has direct access to the beach there. 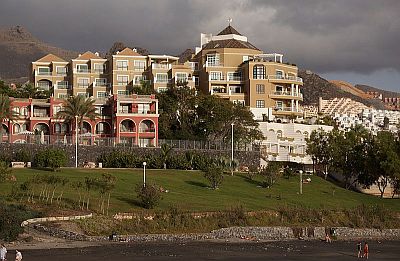 On entering the hotel lobby, you at once experience 5-star luxury. Dominating this area is a huge dome, made of 12,000 pieces of stained glass. This display represents the constellations in the sky over Tenerife and is pretty awe-inspiring when viewed from below.

This hotel complex nestles within lush gardens and has two swimming pools, one freshwater and one heated seawater, plus a jacuzzi and children's pool. Sun loungers and towels are provided, free of charge.

They all have either a balcony or terrace.

The ultimate in luxury, with two bedrooms, each with its own bathroom equipped with jacuzzi and hydromassage shower, a spacious lounge and two balconies with impressive sea views.

When Rod Stewart was on the island for a concert in May, 2009, he and his family stayed in one of these suites.

This is the main restaurant of the hotel and is open for breakfast and dinner. It offers international cuisine, presented as a buffet. (Waiter service, however, is available on request.)

There is a "Cooking Corner", where you can watch cooking demonstrations.

Once a week, there is a themed buffet.

For those of you who want something a little special, this restaurant provides an a la carte menu in a sophisticated, candle-lit setting.

Offering an a la carte menu of Mediterranean cuisine and open for lunch and dinner.

For more informal dining, this snack bar/restaurant is situated by the pool and has an a la carte lunch menu.

There are three bars: the Galeria, situated in the lobby, the Tiffany, which is a piano bar and Armstrong, which is an actual nightclub, featuring live entertainment from international performers.

The Jardines de Nivaria has two swimming pools: one heated seawater and one freshwater with large jacuzzi.

There is also a nine-hole putting green.

The Aequor Spa offers a large variety of massages and beauty treatments. For your further pampering, there is also a hairdresser.