Horse riding in Tenerife is a very prominent, popular pastime, not the least because it provides a leisurely way to explore the island and access places that a motor vehicle couldn't. 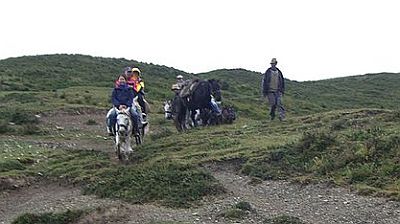 There are many horse riding schools and stables dotted about the island and there's a pretty good chance that there'll be one near you.

Here's a selection of places for horse riding in Tenerife:

Also known as "Horse Riding Tenerife", this horse riding centre was previously known as Club Hipico Aldea Blanca and was situated near that small village, just north of Las Chafiras.

Now, the centre has moved to a much more central location in Adeje, in the hills just behind Siam Park, an area known as La Caldera. The management suggest that it's best to phone them up for precise directions.

Staff are multilingual, being able to communicate in English, Spanish, Swedish, Finnish, Italian and German.

The Center offers both riding lessons and organised treks.

These are horse riding stables in the San Eugenio area of Playa de Las Americas, not too far from the Aqualand water park.

They offer guided horse rides on various routes up into the mountains, one that takes in a banana plantation.

Lessons are available, too, for both complete beginners and more experienced riders.

Maximum of four riders per guide.

Lessons last approximately one hour which consist of about 20 minutes theory and 40 minutes in the saddle. 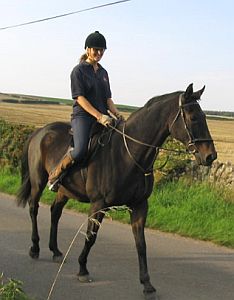 La Caldera del Rey has other attractions, such as a petting zoo, a climbing wall, picnic and barbecue area, plus hire of pedal carts and mini tractors. There is also a childrens' play area.

This horse riding centre, formerly known as Rancho Grande is found on Amarilla Golf, the large urbanization just off the TF-1 motorway halfway between the southern resorts and the south airport.

It's located just at the bottom end of the number one hole of the golf course.

As it has, at the time of writing, only recently been totally refurbished, this centre is brand spanking new!On offer are lessons in riding, jumping and dressage.

I don't have any details as yet regarding opening times or prices. If I eventually do, I'll insert them here.

Meanwhile, for more details, give them a call!

Rancho Bonanza is a ranch covering almost 4.5 acres situated near Granadilla, in the south of the island. As well as offering horse riding tours, the ranch takes in neglected horses, nursing them back to health and also has horses for sale.

Rancho Bonanza offers a variety of tours to accommodate all riding abilities.

Prices range from 30 euros for a one-hour tour to 85 euros for a five-hour one. Also on offer are four-hour moonlight tours for 65 euros.

Tours are confined to weekdays. Riding lessons are given on Saturdays - beginners at 11am; experienced at 12 noon.

There appear to be no activities on Sundays.

This ranch can be found by exiting the TF-1 motorway at junction 22 and going through San Isidro. Take the turning signposted Chimiche (TF-636) and follow this winding road. Eventually, when you're in the middle of nowhere, you'll see a roadsign with a picture of a horse. Take the road branching off to the left soon after this and follow it till you come to a T-junction. Take a left turn and follow this road to the end. You'll see a dead-end sign and another saying "private", but just keep going. The ranch is at the end of this road.

This Spanish-run horse riding centre is found just outside Buzanada, which is a village just off the TF-1 motorway not far out from Los Cristianos.

On offer are riding courses, which include full tuition in the care of horses, such as washing and brushing the animal, feeding techniques and preparation for riding.

Half the lesson time is given over to this, with the other half to actual riding.

Disciplines taught are jumping, dressage and vaulting and the centre accepts both children and adults. Instructors are fluent in English, German and Swedish.

If you don't have proper riding gear, the centre recommends a tracksuit and trainers. They provide the hard hat.

To reach this centre, you need to take the TF-1 motorway, exiting at junction 25. If driving from the south (Los Cristianos), the slip road immediately arrives at a junction and you should turn left. This takes you underneath the motorway, after which you should take the right turn. If from the north, take the slip road (which is an acute bend) and take the first left.

You should now be on a road running parallel to the motorway. You should take the next proper road off to the left. This is Camino Los Migueles and you should stay on this winding road for quite a while. Eventually, you'll arrive at the centre, on the left - there's a big gateway with the name over the top.

In English, "Equestrian Centre of Alcala", this large horse riding venue is found near that village, between Las Americas and Los Gigantes and offers so much more than just horse riding.

There are entertaining shows put on, including demonstrations by experienced riders, with a meal and refreshments.

Children's parties are also offered, where the guests can interact with ponies and other farm animals, such as pigs, chickens, goats and sheep, be entertained by a clown - and have a meal, with optional birthday cake!

There is also a children's play area, with bouncy castle.

It appears that there's no end to what this centre has to offer. Of course, riding lessons are available, catering for complete novices. A one-hour lesson costs 15 euros.

In addition, the centre offers one- or two-day excursions, with the option of staying overnight at a cottage. You can also go on short, supervised rides around the rural area surrounding the centre.

It is found on the Finca de Gambueza road, just off the TF-47. To get onto the TF-47, from the south, go right to the end of the TF-1 motorway and, at the big roundabout, take the TF-47 exit. From the north, the TF-47 is the main road out of Puerto de Santiago.

The FInca de Gambueza is on a road off this, away from the sea. Watch out for a plaque with a picture of a horse on its hind legs. Turn up this road and you'll eventually come to the centre, on the left, which is marked by another plaque.

This horse riding centre is found just outside the town of La Esperanza, some distance to the southwest of La Laguna, in the north.

Riding classes are offered, including a trial lesson for complete beginners, at 16 euros for 45 minutes.

The centre has just introduced classes for young children 6-10 years. They also last 45 minutes and can be purchased in blocks of ten, for 160 euros. These take place on Tuesday evenings and Saturday mornings.

Group lessons can be arranged (up to five people) for the same price - Wednesday, Thursday, Friday and Saturday evenings, plus Sunday mornings.

For the more experienced rider, advanced classes are offered at 180 euros for 10 sessions.

On Tuesday and Sunday afternoons, the centre also organises treks through the surrounding woodland, for experienced riders only. They last 2½ hours and cost 40 euros.

To find the centre, take the TF-24 exit from the TF-5 motorway. This will lead you towards La Esperanza. You have to turn off to the right from this road, but there are no real landmarks to give you. It is a crossroads, there is a little white bus shelter on the left. When you turn onto this road, there is a circle written on the road with "12t" inside it.

Follow this road right to the end and turn left. Along there, you should eventually see the sign for the centre.

A horse riding centre near La Laguna, in the north, offering classes for all levels of riding.

To find it, exit the TF-5 motorway at TF-237. You need to eventually turn off this to the left, so watch out for a sign saying "URBASER Servico de Limpieza Excmo. Ayuntamiento La Laguna". It's the fifth turning to the right from this road. Watch out for a large, gated area, then the turn-off is next, by the red wall. The centre is down this road.

This riding centre, based in La Orotava, specialises in so-called "Indian riding". This, I think, refers to the style of horse riding used by Native Americans and was also, apparently, used by the "cowboys" of the old west in the USA. The technique involves controlling the horse with the legs, thighs and knees, so that only a halter round the head is required.

A very special technique, which is available in classes for both beginner and advanced.

This venue, situated in La Orotava, is so much more than a horse riding centre. It is a place catering for all kinds of adventurous pursuits, including hiking, camping, quad bikes, archery and shooting!

The centre offers treks through the beautiful surrounding countryside and also a course of training, using the so-called "Pat Parelli method", which teaches how to know and care for your horse.

This is an equestrian centre in the northern town of Tegueste. It offers both Riding lessons and trekking.

Situated in the wilds just south of the TF-5 motorway, near Tacoronte, this centre offers treks and lessons with qualified instructors and guides. For the treks, the surrounding Laurasilva forest provides a stunning backdrop.

To find it, you need to be on the TF-288 road, just off the TF-5 north motorway. You're on this for quite a while, then you have to turn right. There are no major landmarks to help you, but, just before this turn-off, there is, on the left, a large white commercial building with a fenced-in green area in front of it. The sign on the building says "Teidagua Chupadero". You take this right turn, following it as far as a mini roundabout, where you turn left, then take the next right a few yards further on. You're now on Calle Candelaria Monte, which is the road the riding centre is on. You'll be on this a long while and, eventually, it turns into a single-car-width dirt track, but, trust me, it's down there!

Not much info regarding this equestrian centre, save its location and contact details. Found just off the TF-5 motorway. Exit at junction 14. If from the east, take first exit from mini roundabout, then second left. From the west exit at same junction, go through three roundabouts, taking first exit each time (you'll pass under the motorway). Keep going, through a fourth roundabout, going straight on. It's the second left after that. There's a sign at the bottom of the street you need to turn up.

Meaning "Castle Riding Stables", absolutely nothing is known about this place, except that it's in Tacoronte.

This is a horse riding school based in La Laguna. Facilities offered include a riding track, a trail and a floodlit arena. Activities comprise both riding and jumping. Found in El Ortigal, La Laguna.