History - the Musical - a huge extravaganza featuring music through the ages

In residence at the Magma Arts and Congress Building in Adeje since July, 2012 is this big scale, full production extravaganza.

It is another option for residents and holidaymakers to treat themselves to something a little more special than visiting one of Tenerife's many bars. 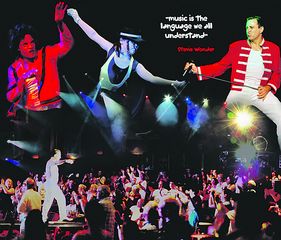 It is an all-singing, all-dancing production, called "History" because it features performances of music all through the ages.

You'll hear anything from recognised classical music giants like Bach, Mozart and Beethoven, through Glenn Miller and Cole Porter, to modern "pop" - the 60s, Abba, Queen - culminating in such up-to-date artistes as Adele.

The company consists of 26 performers, hailing from 16 different countries. As well as the music itself, the show is augmented with big video screens, laser shows and acrobats.

The show is performed twice a week and, for the occasion, the auditorium of the Magma building is decked out with tables and chairs, in much the same style as a cabaret venue. Thus, it is possible to relax and enjoy the show with a drink. (I'm afraid there is no food service.)

The Magma building is a striking, unusual structure right next to the motorway TF-1 and, for those in cars, there is a huge, free car park.

All in all, "History - the Musical" is a show worth seeing.