Grandee ODonnell Tenerife - about as authentically Irish as you can get

When its owners, Kelly and Damien, opened this bar, in 1998, they took great steps to make every aspect of it as authentically Irish as possible - even as far as the name. 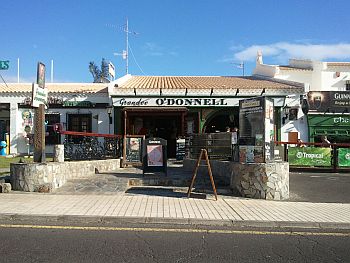 Leopold O'Donnell was born in Tenerife, to a noble Irish family that had fled Ireland to escape persecution from English agents. He lived in the first half of the 19th century and went on to join the Spanish army, who were fighting the Moors. A distinguished career followed, with his rising through the ranks and commanding his troops to win some very important battles. As a result, he was awarded a dukedom and made a Grandee of Spain.

So, here we have someone from an historic Irish noble family - with connections to Spain and Tenerife. Clever!

Next, the Irish authenticity continued to the bar itself. Everything, from the slate floor to the darkwood wall panelling, was imported from Ireland.

To keep draught ales authentically chilled to the correct temperature, there is an Irish "cold room".

The end result is a bar so authentically Irish, you'd think you'd just walked in off O'Connell Street!

The spacious interior is flanked by a couple of terraces, front and rear. For those customers wanting a cigarette with their drink, but don't want to sit outside, there is a separate annex, charmingly named "The Snug", where smoking is permitted.

For lovers of sport, the giant screen plus several other TVs about the place show all major sporting events, including no less than three premier league matches each weekend.

The bar is big on food, too. Meals are available from 6pm till 9:30 pm and sometimes are themed. For instance, Tuesday is traditional Irish - bacon and cabbage; Thursday is steak night; Friday is fish night and Saturday is barbecue night.

Of course, Sunday is not forgotten, with a traditional roast dinner being offered - this time from 1pm till 9:30pm.

All these are very reasonably priced, ranging from 8.50-9.50 euros.

The bar offers live entertainment nearly every night. Always featuring top Tenerife acts, you'll be able to enjoy the sounds of all the classic hits, plus soul music and, on the Irish night, traditional Irish music.

Entertainment begins at around 9:30 and probably ends at midnight.

Finding it is quite easy. On the one-way system around Golf del Sur, you'll see it on your left, just opposite the Green Park complex.