The Devon Arms: a Review

The Devon Arms Los Cristianos is one of my favourite watering holes in Tenerife.

Mine hosts Brendon and Annette assure everyone who goes to the Devon Arms may enter as a stranger but certainly they will leave as friends. They serve good pub grub including a super Sunday lunch and Annette’s famous crumble with lashings of delicious custard. 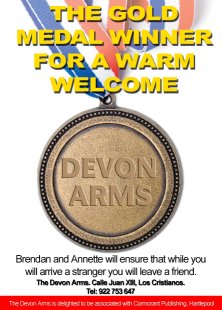 If it’s a snack you are after pasties with mushy peas and real gravy, steak and kidney pie with the trimmings, chicken and mushroom pie, off the bone ham, chicken kiev, bangers and mash or even an omelette of your choice with chips and salad.

Guinness is on draft as well as lager, John Smith’s, bottled beers and a plethora of spirits. A word of warning on spirits these are generous Tenerife measures!

The Devon Arms also have Sky TV and other channels so if sport is your passion if its on the box its on in the Devon.

Add to this a selection of daily newspapers the Devon Arms also has a library which includes several books written, edited or published by yours truly.

Yes this is truly an international pub with Irish, Scottish and of course occasionally the odd Englishman and they don't come much odder than yours truly.

The Devon Arms - a great little bar in Los Cristianos..

John Riddle is a freelance journalist who has worked for various newspapers in Tenerife.