D'Arcos was a Spanish-run bar/restaurant attached to the Hotel Reveron, just up the hill from the roundabout near the Hotel Arona Gran.

It has undergone a thorough refurbishment over the years. I worked there for a time, as half of a duo.

The last time I passed the place, there appeared to be a keyboard player sat in the corner, playing background music.

These days, apparently, the bar provides some sort of varied entertainment every night. You may find a live singer, a speciality act, an Elvis tribute act - even a parrot show!

I have called in on rare occasions for a coffee and, I have to say, found the prices a little steep.

D'Arcos, it appeared, was one of those "tourist" bar/restaurants that ups its prices to cash in on holidaymakers.

There are quite a few hotels in the immediate area and, for people staying in them, it was a handy venue for dining and enjoying a relaxing drink.

Sometime towards the end of the "noughties", D'Arcos, apparently, was no more, its premises being next occupied by an Italian restaurant called "Little Italy". 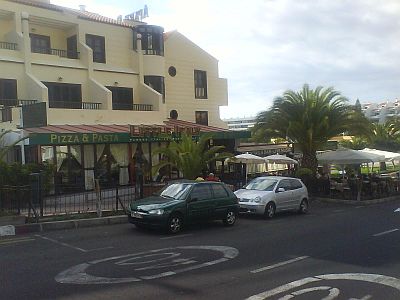 Into the 2010s and the reincarnation of this venue continues. Now it manifests itself as "Frankie's Bar" and is Spanish run, but with the accent on tourists.

To this end, there are different cabaret acts appearing every night and the venue is open as a restaurant during the day. 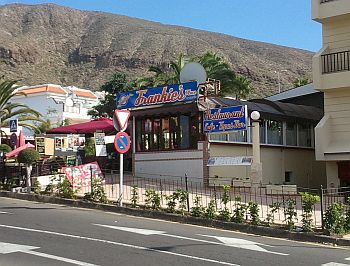