A standard form of competitive ball game in Europe comes under the umbrella name of boules. This French word covers petanque, bola canaria and even the UK's bowls.

All have the common objective of propelling a ball towards another ball to stop a close as possible to it. 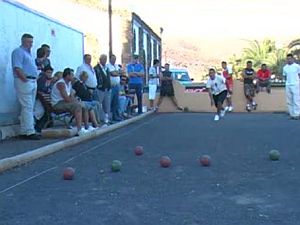 The Canarian version of this game uses a rectangular playing area approximately 50 feet long and 13 feet wide. The area is filled with compacted sand and usually has a few humps, to make the judging of the trajectory of the ball more difficult. Marked on this playing area is the rayo, showing where the player must stand as he makes his shot. He must keep at least one foot behind this line.

The balls were traditionally made of wood, but, nowadays, can be made of paste, too. It was once the rule that there would be a maximum of 12 balls used in any one game, meaning that, if there were two teams of two people, each player would have three balls; with two teams of three players, each would only have two. More recently, the rules have been relaxed a bit, so that there may be 18 balls used, allowing a pair of three-player teams to still have three balls each.

The two teams' balls are differentiated by their colour. One colour is red, the other green, with, maybe, a stripe.

The objective, of course, as stated above, is to get your balls closer to the target ball than your opposing team. There are two moves that can be utilised to this end.

This is simply throwing or rolling your ball with the intention of hitting your opponent's, knocking it out of the way.

This move exemplifies the basic objective: throw or roll your ball to stop as close to the target ball as possible.

At the end of all members of the two teams making their shots, the closest to the target is noted and the winning team is the first to reach 12 points.