Bingo In Tenerife - where you can play legally

Bingo in Tenerife. If you go for a wander in the evening around any tourist town, you may see numerous bars advertising the ubiquitous bingo on offer as part of the entertainment.

This is a lucrative source of income for bar owners, as well as being a popular pasttime for many holidaymakers.

but do you realise that it is illegal? 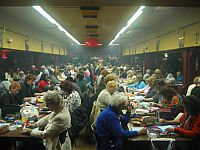 As is usually the case in Tenerife, there can suddenly be a blitz on illegal bingo, with government inspectors descending without warning on bars that are offering this innocent form of gambling and either issuing a stern warning, or issuing a quite hefty on-the-spot fine. Either way, the bingo ceases immediately.

Some bar owners that have complied with this law subsequently find themselves a little peeved that a neighbouring bar may be continuing with bingo regardless and reaping the financial benefit. It's a bit like pot luck, unfortunately.

At any rate, there are several licensed bingo halls throughout the island. Unfortunately, the only information I have on them is their address and phone number. None of them appear to have a website. Here's a list, anyway:

return to gambling in Tenerife